It’s hard to be in a love triangle where the girl is dead.

Cold as Death, Guillotine Theatre’s offering for this year’s Fringe, revolves around this concept. Rather than submit to the lust of the Tyrant (Nello DeBlasio), the Lady (Cate Brewer) chooses death as the only alternative, much to the chagrin to her lover and the former king, Govianus (Dane Petersen). Sounds like your run of the mill tragedy? No, let’s add some necrophilia to spice things up. 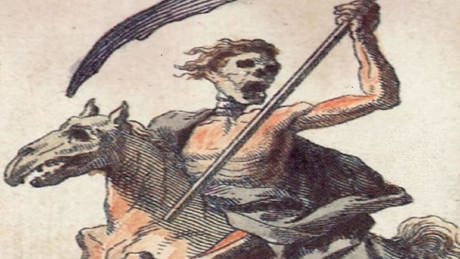 Adapted from a play by Thomas Middleton, Monique LaForce creates a tight group of characters all with complex agendas and intriguing development. Clarissa (Angela Kay Pirko, also playing The Lady’s Ghost) is a sensual and volatile creature who takes pleasure in the sex and violence that the Tyrant provides. Helvetius (Terence Aselford) attempts to trade his daughter to the Tyrant in order to advance in court. After almost being killed by Govianus, he stands up for truth and is imprisoned because of it.

Director Catherine Aselford, in setting this tale in modern day, reminds us of the ageless struggles of love and honor. Her choice in having a different actor play the Tyrant every night not only allows for a different take on the show for every performance, but is a testament to the shifting nature of politics.

DeBlasio as the Tyrant commanded the stage decked out in a huge red and black cape reminiscent of Henry VIII. Even though he had a script in hand, he rarely looked at it and was able to make the descent into lustful madness both chilling and mesmerizing. Brewer as the Lady is the pinnacle of both Elizabethan values and modern feminism. In refusing to give in to the demands of the Tyrant and taking her own life when her lover could not bring himself to, she proves that she is no weak romantic heroine. While the rest of the cast gives great performances, it is Pirko who stole the show as Clarissa. From the moment she stepped onstage, she delivered a nuanced and physically strong performance as she did everything in her power to carry out the Tyrant’s demands.

Guillotine Theatre does the Fringe a great service by bringing this obscure tale to life. It conveys even the most taboo of subjects to the audience in a way that makes them palatable. If you enjoy your plays with a darker side, you definitely don’t want to miss this one.

Running Time: 70 minutes with no intermission

Cold as Death plays through July 25, 2015 at Gallaudet University: Eastman Studio Theatre, Florida Ave NE & 8th St NE, in Washington, D.C. Tickets may be purchased at the door or their Capital Fringe page.