Ready to have some fun? Well look no further than comedian Adam Ruben’s new one man show I Feel Funny: True Misadventures in Stand-Up Comedy at this year’s Capital Fringe festival.

As a seasoned comedian, Ruben opens up with some fun stand up starting with the obligatory jokes of his hometown and the audience. He has a knack for the “funny because it is true” style of comedy. The crowd was ready and roared with laughter, and it was obvious everyone was having a great time. Ruben was endearing and enjoyable to watch through it all. He had just the right mix of funny quips and stories from his past years as a comedian to engage the audience throughout. 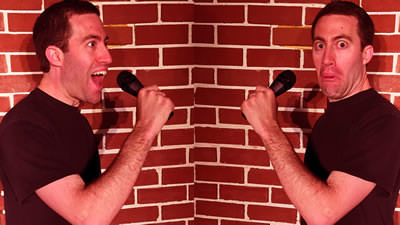 Ruben regaled the audience with stories of childhood misadventures, college edginess, hecklers and comedy jobs that are hard to believe would even exist. The crux of his show describing the 10 worst shows of his life and it is hard to believe he is still standing after these experiences if it weren’t for his obvious talent. Some of the most endearing words gad t be when he described how comedy has always been inside of him, from when he was small to now and how he uses his passion as a dad.

It seems that as I write this there is no way to describe specifics without giving away some of his best jokes. So, I will leave it at that. Suffice to say Ruben had moments of pure comedy, self-deprecation, and vulnerability that allowed him to connect completely with the audience; and this without resorting to the rude and crude jokes that comedians seem to resort to all too often. It was true wit and truly refreshing.

Adam Ruben’s I Feel Funny: True Misadventures in Stand-Up Comedy is a hoot. This is a definite ‘must see’ at this year’s Capital Fringe Festival.