The image is frightening. A beautiful black woman—larger than life, with a resume to match—dons white gloves and a waistcoat, smears makeup on her face and begins the childish song and dance of a minstrel.

It’s a terrifying moment, repeated throughout this one woman show. Written and performed by Dee Dee Batteast—an accomplished actor who began her career at the age of 11—No Aids, No Maids is comedy at its darkest, accusing playwrights and audiences of conspiring to keep the most demeaning stereotypes alive. 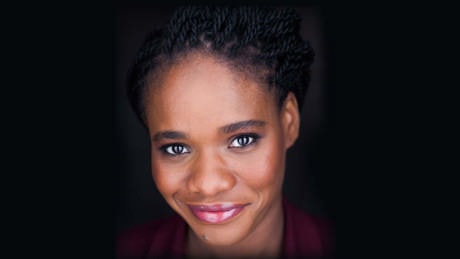 In the ‘Bad Old Days,’ our protagonist reminds us, actors of color were butlers and maids, while gays—invariably men—were artists who succumbed to Aids.

Today’s blacks and gays have a new role to play, but it’s not very different. They are “best friends,” one-dimensional characters who exist solely to prop up the white hetero stars.

One of the funniest scenes in No Aids is Batteast’s enactment of an audition in which she is supposed to portray the “best friend” of a white woman who needs comfort.

First, the casting director changes the black actor from a copy writer to a hairdresser. Then she demands that Batteast play it down and dirty, using the language of the ‘hood.’

Lest anyone doubt the ubiquity of this phenomenon, the narrator shows dozens of clips of television sit coms, feature films, live theatre and commercials on an adjacent wall.

As Batteast explains it—and the audience roars—every black is portrayed as a “magical Negro,” with no life or plans, other than to protect the white protagonist. Similarly, the gays are morphed into “Magical Queers,” who happen to be experts on hetero romance.

The recurrence of the minstrel act punctuates what would otherwise be a stand-up comedy act, cynical but designed for laughs. It reminds the audience that the joke is not really funny and that minorities, whether of race or gender, are still portrayed as caricatures. Their roles exist because they are profitable, and because audiences apparently want to see those who are different portrayed as childish.

According to Batteast, the show—despite its power—is a “work in progress.” To learn how audiences respond, there is a Talk Back following every performance.