The tragicomedy of Theater of the Absurd scrambled together with the zaniness of Vaudevillian physical comedy is an apt description for Michael Burgos’s delightfully wacko The Eulogy. Death is in the air as a heavy Gothic dirge welcomes you to Burgos’ solo performance as the eulogizer for Tomas, an unfortunate fat wretch who has passed away from death by cholesterol from eating too many fried eggs. A cast of cornball characters emerge as the eulogizer struggles to express just the right words at Tomas’ funeral through them. What follows are hilariously antic mime, mayhem, and satiric silliness that take the seriousness of death and turn it into a fun-filled freefall. 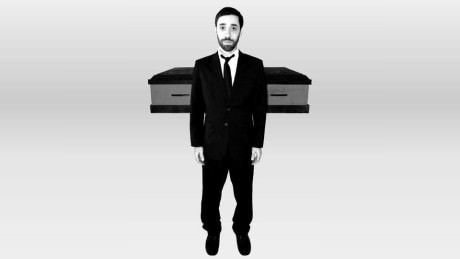 Michael Burgos is truly magnificent as multiple characters including the good ole southern boy who’d been Tomas’ roommate or the flirtatious Spanish nobleman whose scathing eulogy literally raises the dead Tomas only to finally put him out of his misery by setting him on fire as fuel for a marshmallow roast. Is that crazy enough for you?

Dressed like an undertaker on his way to the cemetery, Burgos’ performance in The Eulogy is arrestingly mesmerizing. With every bug-eyed glance, raised eyebrow, flick of the wrist, droll show of teeth, feigned accent, dragged foot, or erratic bend at the waist, Burgos awakens your imagination so vividly that you can’t take your eyes off him as he brings these crazy characters to life.

The story line of The Eulogy is pretty thin and fairly absurd but it makes a lot fun out of very little. A sidebar about the death of a goldfish, Mr. Snowflake, whose demise came about when his 5 year old caretaker shook red pepper flakes instead of fish flakes into the tank seemed misaligned  from the Tomas story but in line with the nonsensical rhythm of the show.  What struck me the most, however, is how Michael Burgos, who wrote and performed The Eulogy,  was so brilliantly able to infuse passionately expressive acting and over-the-top high energy with a bit of audience participation to create a show so devastatingly entertaining it could become a cult experience. It’s all about the energy.

The Eulogy plays through Sunday, July 26, 2015 at The Argonaut, 1433 H Street, N.E. in Washington, DC. For more information or to purchase tickets, visit their Capital Fringe page.