“Death is inevitable for a young lost soul…”

In its world premiere at the 2015 Capital Fringe Festival, The Suicide Journals by Playwright and Director Veronique LaShell MacRae explores the dark, grim, and often hushed subject of teenage and young adult suicide. 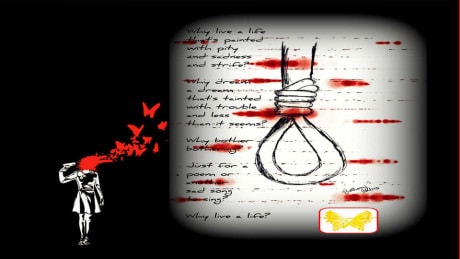 MacRae’s monologues coupled with Ryan Watson’s captivating video projections, create an emotional rollercoaster, tackling the heavy subject matter with grace and unflinching honesty. The story centers around unnamed characters, four in this workshop production: a young man who struggles with his identity in a religious sect that coins homosexuality as sin; a promising scholar who is challenged by the systematic injustices of American society, a girl whose Islamic faith unwillingly invites bullying and ostracism; a woman who learned at an early age that her body was not her own.

Through the lens of the Jumper, the Shooter, the Pill Popper, and the Cutter, The Suicide Journals rips away the mask that often covers what is coined as taboo in order to share the story of youth that have succumb to death by suicide in hopes that someone else’s story doesn’t end the same way.

The cast consists of performers Wilcox Ekenta, Briana Ortiz, Hazel Cherry, and Terrence Lamont Edghill, each breathing earnest life into their misunderstood or mistreated characters. Some of the most powerful moments in the show came when actors took on roles in one another’s stories, momentarily acting as bullies, parents, or other influencers.

With nearly 4,000 youth that commit suicide each year in the United States alone— thinking no one can hear them and they don’t have a voice— this story resonates powerfully and should be brought to anyone who is willing to listen.