When you hear the phrase “Wedding Party” you tend to think of the stereotypical carbon copy of pretty girls in bright dresses and guys complaining about wearing monkey suits. The Wedding Party at Fringe is a whole different animal! Playwrights Megan Dominy and Mimsi Janis, who also star in the delightful comedic romp, managed to fit four unexpectedly well rounded characters into just 70 minutes of hilarious, hair tearing unease. They masterfully address serious issues while balancing the right level of humor and sincerity into each moment. This Fringe show could easily hit the stage running as a featured show at any of the major theaters in DC. 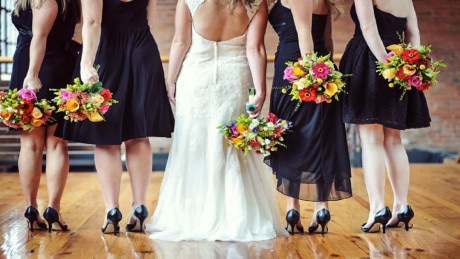 The Wedding Party touches on many sensitive subjects that impact the modern woman’s life. Dominy and Janis have created a voice for rarely discussed topics and address them with refreshing candor. They peer into the internal conflict many women face when confronted with a failure to be ‘woman enough’ in today’s world. Marriage, dating, and children are often seen as a core part of what makes a woman who she is and Dominy and Janis have dared to ask, “What if I don’t fall in line?”

Director Abigail Isaac Fine took this short play and ran with it right to the finish line. This minimalistic play goes to show that over an top production isn’t necessary to tell a well rounded, meaningful story. The tiny apartment the play is set in feels like home to the characters and they moved throughout the space as if they actually lived there. Fine managed to create a heartfelt piece with the help of her talented cast and brought Dominy and Janis’ authentic tale to life.

Madeline Burrows (Trisha) practically ‘screamed’ Bridezilla before she even spoke her first line, Megan Dominy (Caitlin) was incredible at presenting a tightly wound, control freak who slowly unwound in front of our eyes, Mimsi Janis (Elana) commanded the stage with spot on one liners and proved that anyone can break free of a stereotype, and Kristen Garaffo (Chloe) was both obnoxious and endearing in her role as the ditzy, but lovable DC yoga girl-type. Also starring was Jonathan Lee Taylor (Justin) who nailed the oblivious brother of the groom who sets the perilous shenanigans in motion. Together the five actors painted a delightful picture of joy, anxiety, and humor that kept the audience’s heart racing until the very end.

The Wedding Party earns 5 stars and is a ‘must see’ for everyone who’s ever been in a wedding, fans of incense character development in a short amount of time, and anyone who has strong feelings about words on the back of your pants.

The Wedding Party plays through July 25, 2015 at at W.S. Jenks & Son – 910 Bladensburg Road NE, in Washington, DC. For tickets, go to their Capital Fringe page.