I am no stranger to boy bands. In middle school, the New Kids on the Block were all the rage. In college, N*SYNC captured our hearts. Today, fans fill stadiums to see the British lads of One Direction. None of this, however, could have prepared me for the greatest boy band I have ever seen in person – the Altar Boyz at the Audrey Herman Spotlighters Theatre.

With a book by Kevin Del Aguila and music and lyrics by Gary Adler and Michael Patrick Walker, the Off-Broadway hit Altar Boyz is set at the final show of the Christian boy band’s latest tour. Not only do these talented singers want to entertain and spread the word of God, but they also want to save the souls of all of those in the audience with the use of their Soul Sensor. Throughout the show, they must come to grips with their pasts and their futures, and they realize that some of the souls that may need saving are closer to them than they think.

Director Jillian Bauersfeld cast a brilliant group of men to portray the Boyz, who never miss a step of Jose Teneza’s brilliant choreography and whose harmonies are absolutely perfect, thanks  to Musical Director Tan’s coaching.

Darnell Davis plays Matthew, the enthusiastic preacher of the group who soulfully croons “Something About You.”

Griffin DeLisle is Mark, an excellent singer (especially during “Epiphany”) who struggles to hide his true feelings for Matthew.

As the hip-hop-centric member Luke, Garrett Zink delivers some of the most hilarious lines in the show with perfect timing.

Matt Wetzel is the passionate Juan, who shows both his comedic and vocal talents during “La Vida Eternal.”

After recently seeing him perform as The Wedding Singer Robbie Hart just a few weeks ago, I was happy to see Andrew Worthington perform again as Abraham, the Jewish member of the group, and he knocked it out of the ballpark during his sections of “La Vida Eternal” and “I Believe.” Even though he was a little hard to hear over the keyboard, Michael Galizia gave a powerful voice to G.O.D.

Music Director Michael Tan leads the fantastic Altar Boyz Band just offstage. Lighting Designer Fuzz Roark brought the stage to life with his colorful disco-esque lights during “Rhythm in Me.” Set Designer Alan Zemla created a star-dappled set, letting the audience know that we were about to witness true musical stars in action. Laura Nicholson designed costumes that perfectly fit each of the Boyz’ personalities, ranging from the bright flowers on eccentric Juan’s shirt to the picture of Moses on the shirt of Jewish Abraham.

I cannot express enough how much I loved this show. It is pure fun and is an absolute joy to watch. Whether your soul needs saving or not, get to the Spotlighters Theatre to see Altar Boyz! 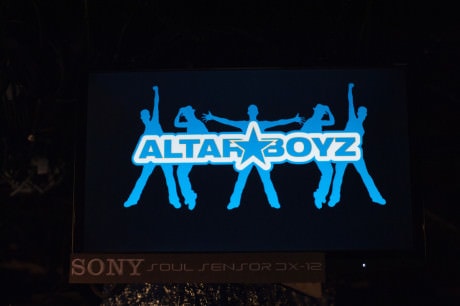 Altar Boyz plays through August 2, 2015 at The Audrey Herman Spotlighters Theatre – 817 St. Paul Street, in Baltimore, MD. For tickets, call the box office at (410) 752-1225, email tickets@spotlighters.org, or purchase them online.