What would you do at the end of the world?

Happenstance Theatre’s newest show BrouHaHa answers this and more, as six clowns journey towards the apocalypse. What this means exactly and when it will happen are not clear, but that’s not really the point. Punctuated by nonsensical statements and questions like, “This is the place” “Are we all here?” and “The time has come,” the ambiguous setting liberates the performers to explore profound subjects as mortality and grief through well-rendered physical comedy. 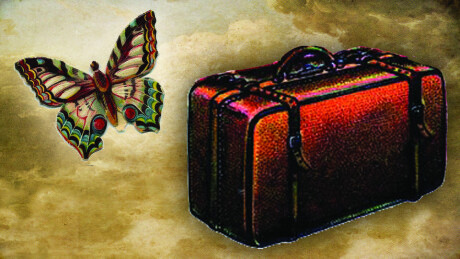 Streamlined to only the essentials, the company consists of six clowns, whose lack of concrete plot does not equal lack of specific character traits. The band is led by overbearing Edith (Gwen Grastorf) and her excitable lackey Rose (Sabrina Mandell). There is naive and open-hearted Pandora (Sarah Olmstead Thomas), the very methodical Rowland (Alex Vernon), straightforward Ralph (Mark Jaster), and who can forget the impish, decidedly un-big, Big Wanda (Karen Hansen). They become explorers, surgeons, bartenders, burlesque dancers, butterfly catchers, and a folk band in turns, but always with a sense of knowing who they are.

Without a doubt, the highlights of the show are the troupe’s interactions with the audience, who on opening night  were particularly open to participating. Their improvisations and spontaneous interactions were so seamlessly performed it was as if they had already rehearsed for every single possibility. Vernon proved to be an excellent mime, inventing mind boggling machinery out of thin air.

Each bit clipped along seamlessly, keeping the audience interested in the constantly changing scenarios, feeling awkward only after a very graceful moment involving the death and revival of a butterfly named, incidentally, Grace. It didn’t feel like the scene was allowed to fully conclude before shuffling us all into the Apocalypse Cafe, an excellent sequence and a high point of the performance.

Happenstance is very clear about its inspirations for this collaborative effort, which include Samuel Beckett, photographs of fleeing refugees and working-class Edwardians, Pina Bausch, and pinned butterfly collections. Certainly there are clear hints of Waiting for Godot in a game involving misplaced hats. And Mandell’s graceful Edwardian inspired costumes paired with a variety of suitcases evoke an ominous journey into the unknown.

Where they will end up and what they will find there is difficult to answer, but if it truly is the end of the world, I would want to go out with the childlike wisdom and hijinks of these clowns.