A fierce and elegant collection of dance works, Dancing Ophelia is mostly but not exclusively inspired by Shakespeare, framed by the long tradition of storytelling through movement, and radical politics of self-love. Don’t let the name fool you, Dancing Ophelia deals with much more than Hamlet’s suicidal girlfriend. Dancing Ophelia is presented by Trajectory Dance Projects, based in Baltimore, MD at Coppin State University. 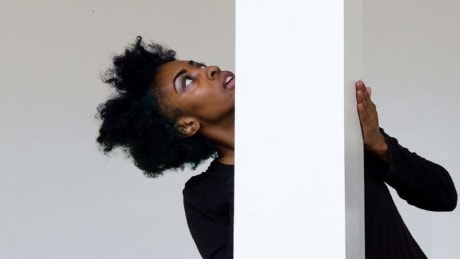 A highlight is “By Day My Limbs, By Night My Mind,” based on Shakespeare’s Sonnet 27, and danced as a solo by Alicia Williams. This piece is a beautiful representation of familiar insomniac frustration, the tension of exhaustion and uncontrollable energy thwarting much wanted sleep. Beautiful and skillful movement is coupled with clever use of a blanket as Williams tirelessly slides and leaps across the stage.

I may be predisposed to like work about witches, but “Mad Women of Macbeth” did the weird sisters brilliantly. The movement was writhing, sensuous, playful, creepy, swift like flying through the air, and twisting like a binding spell. If these three witches are indeed the Fates, I feel really good about the future.

The most unusual dance is set to a recording of poet and activist Sonya Renee passionately reading “The Body Is Not An Apology,” a poem and veritable manifesto of radical self-love and body empowerment, as well as an international movement. This piece comes at the end, but presents an incredible critical and contemporary lens through which to reconsider the preceding works. The dance is direct, uncompromising, an incredibly moving assertion of the individual dancers’ bodies and lives.

To me, the weakest part about this production is the title, which unfortunately does not do justice to the strength and variety of the individual works. In fact, Ophelia never appears, and most of the works feel like a rejection of the heartsick and yielding, beautiful but drowned image of Ophelia, a popular art historical subject. Desdemona, a dance based on the doomed woman in Othello is a psychological portrait of a woman who knows her fate and protests it, testifying through movement to the injustice of her murder.

All the works in this showcase are quite the opposite of Ophelia, they are strong, confident, and defiant.

Dancing Ophelia is presented and Trajectory Dance Project based in Baltimore, MD at Coppin State University.