As a “90s Kid,” I am part of the generation that frequently prides itself on the Saturday mornings and Sunday afternoons it spent growing up watching marathons upon marathons of its favorite cartoons. Though I’ve since traded those cartoons for some crime dramas, talk shows, — and the occasional reality TV — Off-Color Comedy’s heartwarmingly crass The Out of Tooners certainly turned on the nostalgia in an evening of laughter and fun. 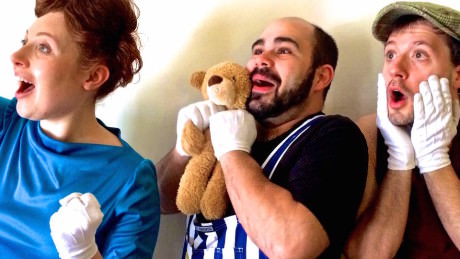 Part musical, part sketch-comedy show, The Out of Tooners, directed by Mark Jesse Swanson, is a series of vignettes written, directed, and performed by the various members of Off-Color Comedy, a Chicago-based comedy theatre making its DC-debut in Capital Fringe. Each of these vignettes focuses on a different character and that character’s outrageous misadventures. As Bugsy (played by Andrew Tardif), Baby Wee Wee (played by Nick Fragale), and Lucy (played by Leana Savoie) each navigate through their own respective quests in school, through America, and even in the bath tub, audiences are instantly transported back to the days of tuning in to their favorite toons.

The charm of The Out of Tooners lies in the cast’s ability to emulate the very personas of our most-beloved animated characters. Andrew Tardif’s Bugsy is unwittingly earnest in his pursuit of a gold star on his first day of school, and his many antics and frequent trips to and from the principal’s office are peppered with satire and mime. As the silent Baby Wee Wee, Nick Fragale employs physical humor in his attempts to care for his newly adopted cat, and Leana Savoie’s Lucy is just the right mix of glitter and oomph as she tries to bring a little friendship to the darker side of American history. Each vignette is irreverently witty and, though the humor goes a little too far in some moments, it’s all in light-hearted fun.

Yes, the scenes are funny, but what would any cartoon be without its theme music? The music, directed by Amanda Claire Buckley, frames each story as they move from the worlds of Mouse-lantis and Tub-lantis through the halls of Bugsy’s school and past the Salem Witch Trials and Columbus’s “discovery” of America. Impeccably timed sound effects and a variety of props connects each moment and character seamlessly to the next.

With charm, wit, and a lot of fun, The Out of Tooner’s has certainly introduced Off-Color Comedy to DC in the most hilarious way possible. Make sure to toon in!

The Out of Tooners plays through July 26, 2015 at the Brookland Artspace Loft Studio – 3305 8th Street NE, in Washington, DC. For more information and to purchase tickets, go to their Capital Fringe Page.

BEST OF THE 2015 CAPITAL FRINGE