In partnership with ANKH Repertory Theatre and The Finest! Performance Foundation, Inc., Arts on the Green presents The Wiz, a modern musical version of The Wonderful Wizard of Oz by L. Frank Baum. 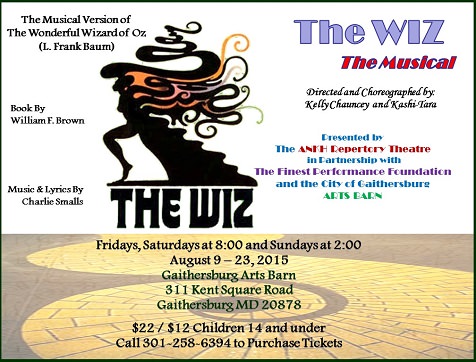 The Wiz is a retelling of Baum’s “The Wonderful Wizard of Oz” in the context of African-American culture with a dazzling, lively mixture of rock, gospel and soul music. This timeless tale turned modern musical tells the story of Dorothy, a restless Kansas farm girl who is transported by a tornado to a magical world of Munchkins, witches and a yellow brick road. On her way to the Emerald City to meet the Wizard of Oz, she encounters the Scarecrow, Tin Man, and Cowardly Lion – friends who help her battle the Wicked Witch of the West and eventually learn that there really is “no place like home.”

The musical is known for Ross and Michael Jackson’s rendition of the showstopping “Ease on Down the Road.”

“Radiates so much energy you can hardly sit in your seat… great fun,” says The New York Post.

Arts on the Green is the City of Gaithersburg’s premier center for the performing and visual arts.