In Part 1 of a series of interviews with The Playwright, Director, and cast of Tying the Knot at the Baltimore Playwright’s Festival, playing at Fells Point Corner Theatre, meet Playwright James L. Beller, Jr.

Daniel: When did you write Tying the Knot, and how many drafts went into what we see on stage today?

James: I wrote the first version a long time ago — I think over a dozen years ago. I don’t even know how to count drafts as I am constantly revising. But there was one major change in the script when a well respected person in theatre told me I had to show the relationship between Michael and his ex-boyfriend, David. In the first version, David didn’t even appear — he was only talked about. That was a classic “duh” moment for me.

What did you learn about yourself in writing Tying the Knot?

Hopefully, that my characters can be funnier than I am.

Why was the timing important or relevant to you to write it now?

All my plays come from a spark of an idea. In this case, it was to reverse the Mother’s reaction from what is stereotypical. I think we’re in a new era, where no one has to defend being gay, straight, or transgender. But we do have to defend being dishonest with ourselves.

Do you have a particular writing process?

Yes. Turn off the critic when writing the original stuff (the first draft), then summon your nastiest reviewer to figure out what needs revising. I’m much better at the latter.

If the role of the artist is to tell the truth, what does Tying the Knot reveal?

Okay, you’ve heard this response before, but if I could say what it reveals in a couple of sentences, I wouldn’t have written 120 pages.

How did you get started in the theater specifically, and why are you a playwright today?

In high school, I was the Stage Manager in Our Town. Then I got the lead in several productions in college. But I always knew I would be a playwright. I wrote my college application essays on why I wanted to be a playwright. I remember saying something about collaboration. And I chose Henrik Ibsen as the person living or dead I’d most like to meet.

Why do you write?

To quote  Boswell’s Life of Johnson, “No man but a blockhead ever wrote except for money.” Call me a blockhead. I definitely prefer to have written than to write. I love revising, but the process of original creation is difficult. Oh but when it works, it’s heaven.

What do you hope audiences take away and think about after seeing Tying the Knot? 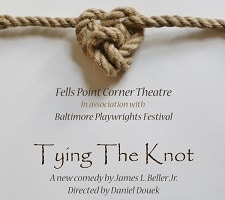