“Seventy-six trombones led the big parade, with a hundred and ten cornets close at hand”!!! From the orchestra conductor’s starting whistle and the first strains of “76 Trombones” in the overture of The Sterling Playmakers’ rousing production of The Music Man, it’s hard not to sing along or jump up and march to the music.

With a large, lively, energetic and interactive cast, this production of The Music Man has something for everyone to love. Director Kathleen Bleutge and Producer Kimberly Fry have managed to bring more than a bit of the Broadway stage feel to this smaller scale, with this entertaining production. Costume Designer Kati Andresen’s colorfully eye-catching period attire, along with set designs by Kathleen Belutge and Bill Fry, immediately evoke images of the early 20th century middle America, transporting the audience back to a time and place long forgotten.

With book, music, and lyrics by Meredith Willson, and based on a story by Meredith Willson and Frank Lacey, The Music Man tells of salesman Harold Hill, who goes from town to town marketing himself as a music teacher and bandleader extraordinaire, promising to make fine musicians out of townspeople with little or no musical skills. All the while, he has intentions of doing nothing more than fleecing the trusting inhabitants of whatever city he happens to be in for every penny he can get out of them. When he lands in River City, Iowa, however, his plans to swindle yet another group of unsuspecting people run awry as his past begins to catch up with him, and he falls in love with the primly beautiful Marian Paroo, the local librarian.

Casting can make or break productions that rely heavily on well-known, but not overly complex storylines. Luckily, The Sterling Playmakers have done a great job with the cast, especially given the wide range of ages of the characters in the musical. From the youngest to oldest, the cast members bring substantial talents to bear across the board, allowing the audience to stay fully engaged and invested in the characters, even when the storyline gets a bit hokey.

As the straitlaced, slightly prudish spinster Marian Paroo, Abby Middleton more than ably juggles the dual roles of actress and singer, managing to credibly portray Marian’s stern exterior and initial skepticism towards Harold Hill, while using her beautiful soprano voice to convey her evolution first to admiration of him and then to love. Middleton shines especially brightly on “My White Knight,” her voice wistful at times, buoyantly hopeful at others, but at all times engaging the ears and hearts of the audience.

T.J. Miles brings a devilish charm to his portrayal of debonair con man Harold Hill, deftly moving between his smooth sidestepping of the highly suspicious Mayor Shinn (Dean Miller), his sweet-talking of the gullible Eulalie Shinn (Carla Stemmer) and her dancing ladies, his sneaky planning with his erstwhile partner in crime Marcellus, and his increasingly heartfelt wooing of Marian. Miles has the most stage time of any actor in the show, and skillfully carries this responsibility on his capable shoulders. In the famously moving duet “’Til There Was You,” he and Middleton draw the audience into their budding love for one another as their voices entwine around the beautiful melody. And Miles’ energetic renditions of “Ya Got Trouble” and “76 Trombone” were showstoppers.

The Music Man contains some fantastic acting from its younger cast members as well. Luke Holsinger is a standout as Winthrop, whose pivotal character provides a strong emotional core to the production. His bright, lilting voice, along with his convincing portrayal of a lonely, shy boy who finds his voice in the hopes and dreams Harold Hill brings to River City, make him a huge part of the evening’s success, especially during his solo.”Gary, Indiana.”

Dayna Jorgensen is also excellent as Amaryllis Adams, a piano student of Marian’s with a not-so-secret crush on Winthrop.

Stephanie Kellenberger and Matt Middleton are wonderful as Zaneeta Shinn, the mayor’s giggly daughter and the town bad boy Tommy Djilas, who finds a sense of purpose in the charge Harold Hill gives him to help assemble and train a marching band for the town.

The showpiece of the evening, though, is the music – The Music Man is chocked full of Broadway showtune classics. From the upbeat “76 Trombones,” to the humorous “Ya Got Trouble,” to the clever “Pick-A-Little,” to the hilarious “Shipoopi,” lead by the energetic Jack Dixon as Harold Hill’s right-hand man Marcelus Washburn, to the nostalgic “Good Night Ladies,” it’s nearly impossible to sit without dancing, swaying, humming along, or at least tapping your feet. Kudos to Music Director Colin Taylor, Vocal Director Deb Manion, and Choreographer Colleen Cheney on their fine work with the large cast!

Saturday evening’s performance was sign language interpreted by staff from HIS Sign, which was an especially nice feature. Several families with hear-impaired members were able to enjoy the performance together, and it was delightful to see the interpreters sign the music, complete with locomotive motions with their hands during “Rock Island” and horse hoof clicks during “Wells Fargo Wagon.”

Wholesome, engaging, and fun family-friendly entertainment can be hard to come by these days, at least without spending a small fortune. The Sterling Playmakers’ The Music Man provides a bit of nostalgia, fantastic shows tunes, and a great evening of affordable musical theatre for people of all ages. It’s definitely worth seeing!

Running Time: Two and a half hours, plus one 15-minute intermission. 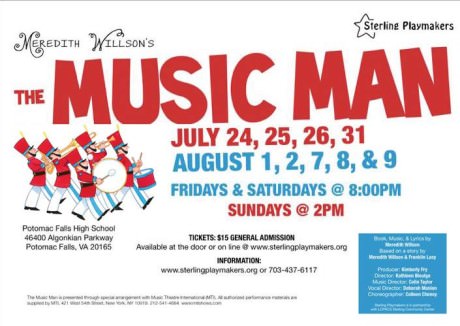 The Music Man plays through this Sunday, August 9, 2015, at The Sterling Playmakers, performing at Potomac Falls High School – 46400 Algonkian Parkway, in Potomac Falls, VA. For tickets, purchase them at the door, or online.