The authenticity and specificity of Katie Sullivan’s scenic and properties design for One in the Chamber could qualify it as a character in this engrossing new play by Marja-Lewis Ryan. Even before we meet the people whose lived-in dining room this is, we can see from the memorabilia and clutter—family photos in mismatched frames on the wall, tattered board games in a pile, a jar of peanut butter and loaf of bread amid laundry strewn upon the table—that this is a household where togetherness has transpired.

What we do not know yet is how that togetherness has been ruptured, and how each family member has been injured, by the death of a 9-year-old son six years ago when his then-10-year-old brother accidentally shot him with a gun.

Playwright Ryan has crafted the compelling narrative of this wounded, unraveling family in the form of a series of one-on-one interviews by a social worker who arrives to determine whether the surviving brother, now 16, can be let off parole. And Director Michael R. Piazza has deftly paced and shaped the family’s gradual undoing as sad and troubling disclosures steadily pile on.

A vividly imagined portrait of a family coping with the loss of a child in a gun accident, One in the Chamber is every bit the equal of David Lindsay-Abaire’s Rabbit Hole (which turned on the loss of a child in an auto accident) in making palpable through powerful theater the ineluctable presence of absence. And just as Rabbit Hole was not some tract about driver-safety education, One in the Chamber stands on its own as a play whose credibility and emotional impact derive from what happens before our eyes and hearts on stage—not policy disputes off.

Then right away comes this curious disclaimer:

Presumably this is meant to avert audience expectations of arguments pro or con gun control. (There are none as such, though a robust series of post-show events promises much expertise and lively discussion on the issue.) Yet like all good and engaging drama—or at least the kind I go to the theater for—One in the Chamber is very much and implicitly political.

In Adrienne Nelson’s nuanced performance of Helen, we see the chilling character arc of a really good mom, a super-accomplished homemaker, utterly losing it over this loss. In Dwight Tolar’s stolid performance of Charles, we see a really good dad, a hardworking breadwinner and Army Reservist, unable to hold together the family he loves. In Grace Doughty’s adorable performance of seven-year-old Ruthie, we see a child escaping family tension into a fantasy world. In Danielle Bourgeois’ captivating performance of 17-year-old Kaylee, we see a big sister fleeing the pain of her broken family in alcohol and promiscuity. And in Noah Chiet’s extraordinarily moving performance of 16-year-old Adam, the boy who killed his brother, we see a tortured soul suffering unbearable guilt. Completing the well-chosen cast, Liz Osborn as Jennifer the social worker shows us someone whose professional objectivity falters then cracks.

The narrative device of the social worker interviews, once the playwright has set it up, can make the play seem somewhat labored. We learn early on that Jennifer will have a scene with each of the family members and that Adam will come last, making the action feel formulaic. This locked-in structure means that a scene I would really like to have seen, one between Adam and Kaylee, did not and perhaps cannot happen. Also, the play’s multiple conflicts—within the family and between the family and the judicial system—sometimes feel trumped up and don’t quite cohere. (This is probably a play that would work better adapted for film.) Yet as the haunting back story of a tragic gun accident is revealed one stunning detail after another, and as we come to understand more and more how one single accidental bullet also ricocheted and caromed around a family, we cannot help but feel devastated.

One in the Chamber is a true modern tragedy, epic in its implications. 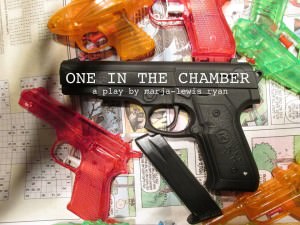 One in the Chamber plays through September 6, 2015 at The Mead Theatre Lab at Flashpoint – 916 G Street, NW, in Washington DC. For tickets, purchase them online.