Lights dim as the sirens of an air raid swarm the area. A sea of blue gowns dazzle up top, while black and white tuxedos populate an expansive auditorium. A moment of silence brings memories of fallen soldiers, brave sacrifice, and prayers for peace. So began Ode to Peace: A Symphonic Choral Concert, which paid a lovely tribute to the 70th anniversary of the victory in WWII. It was presented by The Confucius Institute at UMD and the Greater Washington DC Chinese Communities. 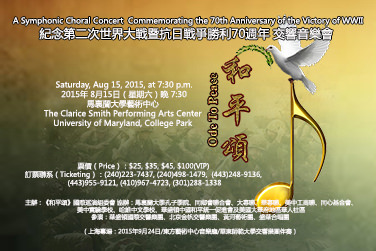 Composer David Zhang spent two years creating Ode to Peace, a musical work made up of eight movements that illustrate the harmony between humans and nature. Through it, Zhang hoped to mirror a world that eliminates terror and promotes peace. The first part of the evening featured a collection of classical war songs and orchestral music, followed by Zhang’s title work in the latter part of the evening. This program evidently targeted a Chinese audience, as much of the playbill and narrative was performed in Chinese. As a non-Chinese speaker, it became somewhat difficult at times to follow along, but subtitles and animated expressions of the singers lent a vital bit of understanding to the performance’s overarching themes of remembrance, longing, and joy.

The first song, “Eight Hundred Warriors,” featured a steady drum beat and sounds of an army marching into battle, symbolizing the soldiers’ boosted morale and resistance. Following the instrumental prelude, vocalist Wei Tang delivered a heartfelt presentation of “Longing for Homeland,” his gesture and emotions graceful, yet full of desire. Zhang as a conductor seemed precise and passionate, though reserved. Another one of his works, “New Century Capriccio,” showcased syncopated, difficult rhythms that created a unique contrast between the smooth vibrancy of the strings with the quick staccato of other sections. A stunning harp solo and percussive sequence ended the piece.

Up next was a vocal concerto entitled “My Dream.” Mezzo Soprano Lihui Zhang sang a progression of vowels in this piece that paired together the sounds of the human voice and instruments without any actual words. Overall, Zhang hit many high notes with an easeful lightness and added to the peaceful aura of the work.

David Zhang’s Ode to Peace movements displayed a compelling story that showcased the talents of over sixteen lead singers, 160 chorus members, and full instrumental backing. While, at times, the choral part felt overpowered by instruments, the synthesis of all these components proved nothing short of aesthetically pleasing.

While the music created an enjoyable atmosphere, the use of flash cameras with shutters proved distracting. Particularly when the performance centers itself on sound, the addition of flash photography can detract from the beautiful symphony that echoes throughout. Some transitions also felt slightly unrehearsed, as choir members seemed unsure of when to stand up for their roles and movement patterns on stage got a bit cluttered.

“Why should we not treasure such a short minute or two?,” reads the screen during the ode’s epilogue. Indeed, a concert celebrating heritage, history, and identity shed light on the simpler moments of life. Whether it’s saying thank you to the people we care about, remembering the sacrifices that others have made for us, or doing what we can to make the world a slightly better place, society rejoices in the luminous sounds of good music, comfort, and community.

Running Time: 2 hours and 50 minutes, including one intermission.

Ode to Peace: A Symphonic Chorus Concert played for one night only, August 15, 2015 at the Clarice Smith Performing Arts Center – 3800 Clarice Smith Performing Arts Center at the intersection of Stadium Drive and Route 193 (University Boulevard), at University of Maryland in College Park, MD. For tickets to future events, call the box office at (301) 405.ARTS (2787), or purchase them online.