Summer Hummer IV: Foreplay! made its two-show debut last night at Signature Theatre. If you didn’t plan properly or were on vacation, you missed a provocative evening of fun and frolic at Signature’s house of ill repute, before it was reconverted back to its current run of THE FIX, which runs through September 20th.

Taking Care of our Own is the sole beneficiary of tonight’s festivities as Matt Conner so aptly states at the end of the following video, ”because we are taking care of each other.”

The evening started at 7:30 PM with a scheduled 90-minute show, with a 30-minutes break and then the second show was performed. So, this report brings you a birds-eye perspective of what transpired in the cock-eyed second show (since the first show was just practice (just kidding!)

For those of you in the Washington DC community who have never experienced this extravaganza of delight, despite being advertised as FOREPLAY, don’t ever let that be a deterrent to your attendance since it is really a musical revuew. Yet, it is one with a twist where costumes at times are minimal and piles of clothes end up on stage at the end of numerous intervals throughout the evening. While some of these staged events are happening, actors/actresses/singers spend equal time in the audience soliciting your business (donations) as you remember the Hummer Rules – all the performers are equal opportunity employees; wherever you want to stick your donation, go right ahead! 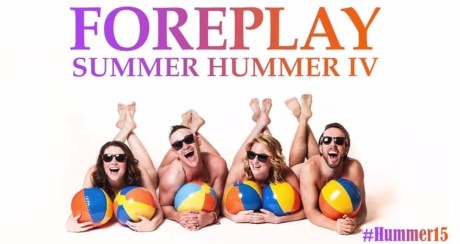 Some of these performers have been participating in this event yearly while others sheepishly admitted during the evening that they were hummer virgins. Can you imagine?  Special mention also goes to the 4-member band under the capable direction of Darius Smith, who also provided the keyboarding. Collectively, approximately 100 individuals created, concocted, performed, and worked behind the scenes at no renumeration to make this event all that it is.

A video opened the evening detailing the mission behind Taking Care of Our Own and its distribution of over $20,000 in emergency funding to members of the DC Theater community since its founding. This year’s campaign began its yellow bucket brigade during this month. Four theaters mentioned where successful 2015 summer fundraising has occurred includes Fords which raised $3,200, Signature where funds collected totaled $5,000 and $6,000 during the performances tonight, Folgers collected $6,100 and Arena patrons emptied their pockets of $10,600.

(Apologies are offered in advance to the entire cast; there’s no way I can report on all 25 acts, or it would be the longest review in the history of mankind.) My favorites of the evening included: Bobby Smith and Evan Casey singing a “You’re the Top” duo of slightly modified lyrics; Donna Migliaccio performing a racy “I Don’t Know how to Love Him” from a Karma Sutra reference book including video still shots of over ’69’ different positions (well, maybe not 69-but close) of human being’s favorite nighttime sport;Will Gartshore dressed in black leather pants with his whip trying to bring some order to his six assistants with “Bring on the Men”; James Gardiner and Evan Casey dressed in bedroom gear collecting audience participation one-liners followed by a madlib pussy-footing rendition of “Memories” sung by Sherri Edelen; Felicia Curry sharing her contribution from her recent Oliver performance of “As Long as He Needs Me” which quickly morphed to a modified version of “I will Survive”;Stephen Gregory Smith trying to convince the audience that there is lots of good eating on a popsicle stick in his rendition of “The Popsicle Song”;Nicholas Rodriguez entertained while walking around the audience singing “Don’t Let Me be Lonely Tonight”; and Nova Payton – with help from eight additional cast members – held up various sizes of male sexual apparatus while performing…the song “All the Man That I Need.”

Here’s the naked truth: I really got a rise out of tonight’s show (several times). Now it’s time to go take a cold shower.

Summer Hummer IV: Foreplay! played for one night only on August 17, 2015 at Signature Theatre – 4200 Campbell Avenue, in Arlington, VA.