First things first: Happy Big One Oh Oh! to The Vagabond Players. The show was not only a Five Star treat, but the opening night audience was also treated to birthday cake in honor of the troupe’s centennial. Though it’s reached a hallmark in American theater (or theatre), Vagabond is still frisky, risky, and fresh.

Greater Tuna, the first of a four-play series written by Jaston Williams, Joe Sears, and Ed Howard was first staged by Vagabond Players during its 1996 – 1997 season, about 15 years after its stage debut in Austin, Texas. Its first Off-Broadway run was a year later.

From the opening announcements to the end, The Vagabond Players’ Greater Tuna is a hysterical hoot.

Two male actors, Steven Shriner and Brian M. Kehoe, portray 21 nutcase characters, of varying ages and genders. All but one are lifelong residents of the backwater town.

The two slide in and out of characters and seemingly complicated costumes with head-snapping speed. Amazing.

Another Vagabond who portrays multiple roles is Anthony Lane Hinkle. He’s not only the director of this controlled madness, he is the show’s talented scenic designer and costumer. I think he was also cutting the cake and selling tickets.

The show, now nearly 35 years old, unwittingly foretells some of the inflamed passions surrounding the removal of the Confederate flag from public places this summer.

Greater Tuna show is an affectionate look at the folks in the tiny, isolated Texan town of Tuna. Instead of a by-the-book-plot, it portray a series of comedic snapshots framed by two local radio disc jockeys (Shriner as Thurston Whellis, Kehoe as Arles Struvie), who broadcast live from station OKKK – when the equipment works – wearing their Stetson 10-gallon hats. It all takes place within the space of a hot summer day in Tuna, billed as “Texas’ third smallest town.”

(That “OKKK” bit should give you a hint of the town’s slowed down, back-in-the-past, drawling vibe, when, there, it was still OK and honorable to be in the KKK.)

The set is simple – a few chairs are moved by the characters to set up the next short scene. There is a stunning display of vintage radios, stacked atop one another that serve, alternately as a pulpit, mirror, and more. Food, animals, strychnine poison, even a dead judge, are all vividly created through the actors’ pantomimes.

The two men’s transformation from character to character is well worth the ticket. Shriners is a tall, commanding presence as Reverend Snipes (think televangelist and convicted felon Jim Bakker) Sheriff Givens or local KKK head Elmer Watkins, yet is giggly tender with pantomimed pooches as Bertha Bumiller, mother of the dysfunctional Bumiller clan, and psycho sinister in the skin of Pearl Burras. Pearl has an addiction that is doggone awful.

Brian M. Kehoe’s expertly captures the angst-ridden Charlene Bumiller and her pain at not being selected as a cheerleader. He is also her twin brother Stanley Bumiller, recently released from reform school who rages at his sister for tearing his jeans and at others for past transgressions. Their younger brother Jody is a dog-aholic, constantly surrounded and followed by eight or more dogs. And, to the consternation of his mother, Bertha Bumiller, he keeps bringing more home.

His first femme fatale turn onstage is as Didi Snavely, a woman who runs Didi’s Used Weapons. “If we can’t kill it, it’s immortal,” she says smoking an imaginary cigarette.

He is also the snobbish Vera Carp, a religious zealot who is vice president of the Smut-Snatchers of the New Order. Her agenda includes one-upping Reverend Spikes at every opportunity.

The Reverend Spikes, Vera Carp, and Bertha Bumiller  want to ban various books from the local high school, among them the dictionary for “explaining words” they don’t like – like nuts and balls, Alex Haley’s Roots (“It only shows one side of the slavery issue …”), Bury My Heart at Wounded Knee (General Custer was a fine man.), Huckleberry Finn (a black guy hangs out with white people), and Huckleberry Finnt (teen sex).

“Yes, we’re looking into the rest of his plays, too,” snaps Bertha Bumiller.

The rest of the show’s crew did a stellar job in putting this production on the boards. Forgot to mention Brian M. Kehoe has yet another role in the play: he is also the Sound Design guy.

The show runs Thursdays through Sundays until September 27, at the Vagabond Theatre, 806 South Broadway, in the Fells Point section of Baltimore. 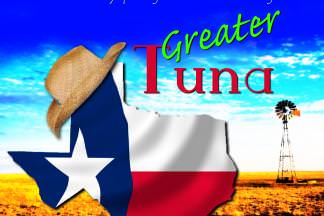 Greater Tuna plays through September 27, 2015 at The Vagabond Players – 806 South Broadway, in Fells Point, in Baltimore, MD. For tickets, purchase them online, or at the door. 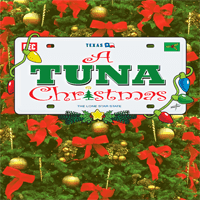