Family comedies are often hit or miss, but Vanya and Sonia and Masha and Spike at the Old Opera House is a poignant comedy strengthened by quirky and heartfelt individual performances.

Excellently directed by Steven Brewer with very clever and witty writing by Christopher Durang,  Vanya and Sonia and Masha and Spike depicts middle aged siblings Vanya and Sonia, who share a simple home in Pennsylvania where they normally bicker about the circumstances which brought them together. But one day when their famous movie star sister, Masha, drops in for a visit with her significantly younger boyfriend Spike, the old sibling rivalry resurfaces. Add in the family’s physic maid with her dire predictions and a starstruck young actress and you have the perfectly poignant set up for a disastrous family reunion.

Bill Taylor is extremely gentle and refined as soft spoken brother Vanya. His character portrayal and mannerisms are extremely reminiscent of David Hyde Pierce as Dr. Niles Crane on the television  series Frasier.  Taylor’s monologue rant at the end of the show about his positive memories of the past was extremely well done and expertly displayed his versatility.

As adopted sister and the introverted, down beat Sonia, Karen Heyser-Paone is outstanding. Her deadpan delivery and fantastic comedic timing is excellent. Her opening scene where she shatters coffee cups was hilarious and her phone conversation with a potential suitor in Act II perfectly mixed the character’s adorable an neurotic tendencies.

Christine Brewer is excellent as the flighty and over dramatic Masha.  Her character voice and exaggerated portrayal of a pampered starlet is spot on. The sharp contrast between Brewer and Heyser-Paone as oppositional siblings is really incredible. The emotional confrontation between the two at the top of Act II was fantastic and an expertly crafted moment of drama in the midst of the comedy.

Amy Hebb steals the show as the family’s physic maid Cassandra. Her first entrance was incredible and  Hebb has a knack for milking the comedy in every one of her character’s absurdly over-the-top moments. Her bit using a voodoo doll in Act II literally almost stopped the show with laughter.

Henry DeBuchananne is superb as Masha’s sexy and confident boy toy, Spike. Though the character is extremely self-involved and not too bright, DeBuchananne still makes him loveable for the audience throughout most of the show. His comedy bit involving spritzing himself with water after a morning run was phenomenal. Elizabeth Ricketts is adorable and sweet as a naïve aspiring actress who is starstruck while meeting her  idol, Masha, and the rest of the family.

The single set, designed by Bobby Cline and Lee Hebb, is a subtly detailed middle class sun room with ample space for all of the characters’ physical comedy bits. Costumes, designed by Ed Conn, are simple, brightly colored modern clothes which use different styles and patterns to showcase each character’s different personalities. Will Heyser’s lighting design is subtly simple and nicely displays the different points during each day and the passage of time.

Running Time: 2 hours and 30 minutes, with one 15-minute intermission. 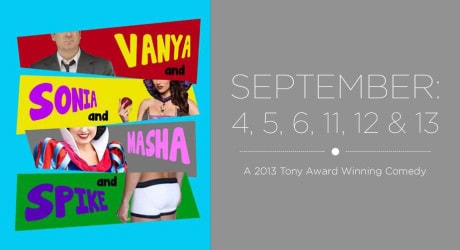