Underground Railroad Game is a show that doesn’t care who it shocks. It’s filled with racial and sexual stereotypes, raunchy language, and offensive images, not to mention full frontal nudity. There’s something in it to offend almost everyone.

And I wouldn’t have missed it for the world.

Created and performed by Jennifer Kidwell and Scott Sheppard, Underground Railroad Game is an outrageous and hilarious show, a play that explores race relations through the prism of a pair of middle school teachers – a black woman and a white man – who begin an after-hours romance while teaching their students about the Civil War. Think they can just ignore centuries worth of struggles, strife and stereotypes? After all, we’re in a post-racial America now, right?

Underground Railroad Game has its roots in a real game that Sheppard played in his fifth grade class: he and his fellow students learned about the Civil War-era Underground Railroad by moving black baby dolls from classroom to classroom to symbolize the flight of African Americans from slavery. One team played Union soldiers and another played Confederates, and the teams earned points depending on where the dolls ended up. In this Fringe Festival production, as the two teachers explain the game to their students, they’re so enthusiastic about making learning “fun” that they don’t seem to realize how tasteless the whole enterprise is. At one point Kidwell excitedly tells the audience (taking the place of her students) that even though slavery was bad, “the silver lining is… the Underground Railroad!”

Pretty soon the two teachers begin a relationship, and they find they can’t keep their classroom attitudes out of the bedroom, and vice versa. Sarah Sanford’s dynamic direction moves the audience fluidly from reality to fantasy and from century to century, as the two teachers slip in and out of different personas.

For example, in the opening scene, Kidwell and Sheppard play the escaped slave Sojourner Truth and a Quaker abolitionist. Pretty soon they transform before our eyes into clueless, goofy, modern day teachers; then they’re in a private fantasy world, dancing like Cyd Charisse and Fred Astaire in The Band Wagon. One moment they’re scolding their students for writing a racial slur on a sign; the next they’re staging a kinky slave auction, with the racial roles reversed. They don’t want to see their students breaking a racial taboo, but they don’t mind breaking a few themselves in private.

Underground Railroad Game is often uncomfortable to watch, but that’s the point. There’s no resolution to these contradictory viewpoints, no easy answers – but will there ever be?

At the end, those panels slide away, leaving a stark, empty stage behind, as the two teachers wonder what they’ve been left with. The riotous laughter is a memory. And for the players in this Underground Railroad Game, the game – and the struggle to move beyond our shared racial heritage and our shame – goes on. 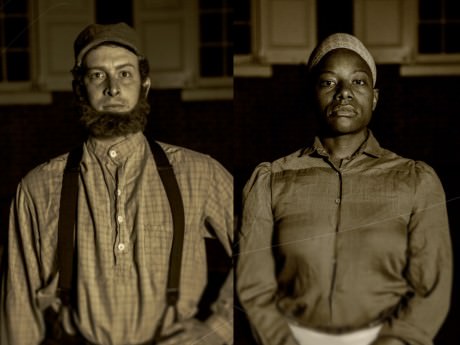