September 25,  2015 marks the beginning of Peter’s Alley Theatre Productions’ 4th Season with the Opening of Willy Russell’s award-winning, Educating Rita. Although many remember fondly the highly successful film version starring Michael Caine, the play is somewhat of a hidden gem, rarely produced in the states since its debut 35 years ago. 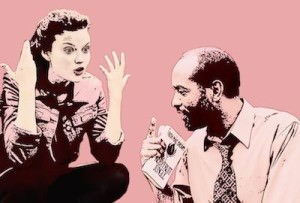 This witty and wise tale of a Liverpool hairdresser who embarks on a quest to attain an education and thus enhance her life, is a timeless and universal one, still funny, still poignant, and still quite relevant today. It’s not a British story, it’s not a story that’s particular to Northern England or to the year in which it is set, 1979, although of course those are significant elements that lend richness and authenticity to the journey that Rita takes. And although the play may create particular resonance for those whose own roots are modest and who must fight the negative forces that surround them to achieve, it is at its heart, a story of self-realization, of listening to one’s inner voice, and discovering our best and truest selves on our own terms.

Who cannot relate to that? Whether it is a single moment or a gradual epiphany, at one time or another don’t we all find ourselves at that precipice, making that choice to go right or left, to follow the expected path or create our own?

This two-hander” also provides our talented cast with the opportunity to explore complex and challenging roles. Both “alumni” of Peter’s Alley,  Dexter Hamlett (Stop Kiss) and Chelsea Mayo (Time Stands Still) have dug in and not only mined Willy Russell’s script for all its worth, but managed to imprint their own unique stamps on these already rich characters.The demands, of course have been enormous with a two person show: both actors onstage for the entire show, tackling text and especially intricate accents.

It’s been a pleasure to watch these gifted artists expand their own horizons in roles that are somewhat of a departure for both. For those who are familiar with their already impressive body of work in the area, it will be an added treat for you will see some very different sides to these actors, and I think you will be as impressed as I am.

The fall season of theater is quite an eventful one for the Washington area, but I do hope that you will find a place for Educating Rita in your hectic schedule. There are five weekends—19 performances to choose from, including a Pay-what-you-can Preview and many discounts.

This season we offer, for the first time Student and Senior Discount tickets, all Sunday evening performances are just $15. These discounts are an added attempt to keep our work accessible to those who seek the finest quality professional theater at a moderate cost. So mark your calendars and find your way to our little space in Shirlington this fall for Educating Rita….and bring a friend!

Educating Rita by Willy Russell plays September 25-October 25, 2015 at Peter’s Alley Theatre Productions performing at Theatre on the Run – 3700 South Four Mile Run Drive, in Arlington, VA. For tickets, buy them at the door with cash and/or a check, or purchase them online.

There is a Pay What You Can Preview on September 24th.