To all appearances, As One is a chamber opera about someone who transitions from the gender category he was assigned at birth into the gender category she believes she belongs in. As One presents itself as a transperson’s story, in other words—but there’s a twist that makes the work a magnificent high point in theater’s portrayal of the inner experience of gender generally.

The opera, conceived and composed by Laura Kaminsky, is a monodrama whose single character is performed by two singers. One of them, a baritone, plays Hannah Before, beginning in his youth. The other, a mezzo-soprano, plays Hannah After, encompassing her young adulthood. But unlike other gender-bending enactments, As One does not give us Hannah Before in a first part transforming into Hannah After in a second (as happens in, for instance, Sarah Ruhl’s Orlando, where a single actor plays Orlando as a boy in Act One then as a woman in Act Two). In As One, Hannah Before and Hannah After are both onstage throughout. They each sing soaring solos at times and in heartfelt harmony or counterpoint at others. They present to us a singular self whose lyrical introspections, contrapuntal exchanges, interknit vocal lines, and overlapping ranges become a pulsing metaphor for the multidimensional universe of human sexedness.

The brilliance of As One is that it completely subverts the obsolete male/female binary. As One models instead a multi-octave aural world within which one’s pitch when one sings—to oneself, in a duet, along with a chorale of others—need have no either/or; it need have only the glory of song.

And what voices we hear in the new UrbanArias production now playing at Atlas! Luis Alejandro Orozco as Hannah Before and Ashley Cutright as Hannah After sing with exhilarating power and sensitivity. And in those rare moments when they sing exactly same note—literally as one—the effect is sublime.

Orozco and Cutright’s physical presences on stage are balletic with grace and stunning in synchronicity. Theater history is replete with tropes of conventionally attractive cis male and cis female performers depicting sexual chemistry or tension. But in As One, Orozco and Cutright—who indeed are extremely attractive—play not two lovers but the very same self, learning to love themself, and they do so with such exquisite subtlety that I was blown away. To see, for instance, one actor comfort the other who is in some distress is to be utterly transported out of one’s everyday ways of seeing.

Near the beginning is a scene in which Orozco and Cutright, standing on either side of a clear plastic panel, embody mirror image to each other, with Hannah Before seeing himself as, and longing to be, Hannah After. From that instant on, the empathic reflection of one actor’s performance in the other’s became a feeling-flooded through-line.

Last night in a talkback after the show with the cast and creative team, I asked how—as actors accustomed to playing opposite another actor in the role of an “opposite” sex—the two had achieved such authenticity of unanimity. Director Octavio Cardenas answered by relating what he called “an accident in rehearsal”: One day, he said, Orozco and Cutright both forgot their blocking in a scene, and for a telling time they looked intently to each other as if to find in the other the memory they each lacked. “That’s it,” Cardenas said he told them (I’m paraphrasing); “you just found who you are to each other on stage.”

The story line, crafted into a soulful libretto by Mark Campbell and Kimberly Reed, begins with a boy on his paper route in a small town and ends with a woman discovering her true self in another country. Along the way in the journey are richly evocative passages. At one point, which was eloquent, Hannah Before and Hannah After sing of seeming to live in separate cities connected by a bridge they must keep traversing back and forth. At another, which was excruciating, Hannah After is brutally attacked while Hannah Before recites names of murdered and disappeared transpeople.

UrbanArias General Director Robert Wood said of that grim recitation in a recent interview, “Based on the names and countries of origin of the victims, it was immediately clear to me that most of them were people of color. That really hit me hard. So I decided to cast our production with two wonderful singers of Hispanic origin. To me, it was important to acknowledge that transgender people come from every conceivable background.”

(Conceivably As One could also be cast to acknowledge that transgender people are not only hearing. Thinking of Deaf West Theater’s production of Spring Awakening now on Broadway, I can readily imagine the physical interplay between the two Hannahs leaping to even greater artistic expressivity and gender-illuminating relevance if performed in ASL.)

Co-libreticist Reed, who herself is trans, is an acclaimed filmmaker, and the film she created for As One—projected onto the stark, abstract set designed by Adam Crinson—visually supports the storytelling with such striking seamlessness and effectiveness as I have rarely seen in live theater. Sarah Riffle’s costume designs, beginning with the actors in matching athletic shirts, jeans, and sneaks, beautifully captures the identities they don. Riffle also designed the lighting, which kept the imagined worlds of the play shimmering before our eyes.

Wood conducted a string quartet (Sarah D’Angelo, Saskia Florence, Megan Yanik, Danielle Cho) that was much more than accompaniment; it became another character. As One was commissioned by American Opera Projects, where Laura Kaminsky is composer-in-residence, and its simplicity—four musicians, two singers—was for me a source of its success as theater. To my non-opera-savvy ear, the string quartet sounded more interesting musically than did the vocal lines for the Hannahs, which were relatively less melodious, but that never diminished my thrilled immersion in the singular sensation of two voices with gendered connotations singing as one self-engendered human being.

The poetic libretto of As One is available for download, and if you can’t catch this too-brief run, I recommend its reading pleasure. But hearing is believing: As One is one resonant wonder. 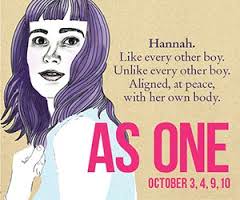