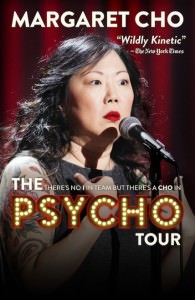 Following opener Selene Luna — who seamlessly and enthusiastically delivered nearly 30 minutes of hilariously original takes on being a little person, being an atheist who’s afraid of ghosts and being in a committed relationship with a “normal-sized” guy, Cho brightly blazed on stage, sporting a black tank top, which highlighted her elaborately tattooed arms, and black leather pants, vigorously hitting the ground running with a broad range of topics from ISIS to Rachel Dolezal to gun violence.

As her wide-ranging fans will attest, what is so refreshingly amazing about Cho is that she is so unshakably straightforward, fiercely fearless and considers absolutely nothing off limits. Innovative and pioneering, the avant-garde comedian continuously kept her audience shocked and awed with her steely socially-aware brand of comedy amidst unsettling current events interspersed with her uproariously candid commentary on her personal life.

From singlehood to Donald Trump’s political aspirations to rape survival, Cho tackles difficult subjects with sensitivity and keen insight. Part of the show also includes touching tributes to her “father in comedy,” Robin Williams, and her “mother in comedy,” Joan Rivers. Much of Cho’s new material was shaped by the loss of her comedic icons, both of whom Cho credits as inspiring and propelling her during the course of her 20-plus-year career.  She poignantly and delicately shared how she had a hard time grieving the loss of Williams and wanted to put his legacy into constructive action.

“All the San Francisco comedians, we were so devastated by his death, so I put together a homeless outreach called #BeRobin that was really a tribute to his philanthropic life,” Cho shared.

#BeRobin started as a two-month campaign in which Cho busked the streets of San Francisco to raise awareness of the homelessness epidemic. The outreach program raised several thousand dollars for shelters across the city via GoFundMe.

“It’s really amazing how generous people are,” Cho relayed. “I think that problems of homelessness in San Francisco are really overwhelming, so I’m glad to have been able to do something.”

Though her 80-minute show was, at times, heavy in content, PsyCHO also contained celebratory elements, including Cho officiating a marriage at each of her tour stops.

“I actually was deputized by Gavin Newsom to perform them in City Hall in San Francisco, so I essentially was the Kim Davis of San Francisco, although I actually did my job,” joked Cho, who has since obtained accreditation from an online ministry to perform ceremonies nationally.

More than 15 years after her breakthrough one-woman show, “I Am the One That I Want,” Cho demonstrates that she still maintains her boldness and zeal as a stand-up comedian, navigating through challenging terrain with authenticity and aplomb.  Broadminded, progressive and revolutionary, Cho does not miss a beat in her latest wildly eclectic stand-up routine, exhibiting that she is as primed and poised as ever to address and spark debate on taboo subject matters in a cleverly cathartic light.