Four lost young people in a deserted beach house, in Dublin, late at night.  There is a thunderstorm beating down. This is the evocative opening scene of The Magic Tree, in its American premiere at The Keegan Theatre as part of The Women’s Voices Theater Festival. There is murder; flight; and a gang rape plan that goes disastrously wrong.

Gang rape, according to psychologists, is fueled by frustration and the need to belong. Often, there is a dominant sociopath who runs the group. Ursula Rani Sarma’s play, The Magic Tree, confronts the subject in lyrical prose, and her portrayal of the vulnerable Lamb and her tormentors, Doc, Lenny, and Gordy, is well-written and haunting. Still, although one of the young men, Gordy ultimately has second thoughts about the rape and even seems to fall in love with Lamb, rape is a crime of violence. Normally it is hard to have sympathy for anyone who only changes his mind about the rape because he develops feelings for the victim.

Chris Stinson, in a fine performance, gives us a Gordy who is someone we can care about; despite the dreadful circumstances in which we meet him. His skills as an actor make his character much more appealing than would otherwise be the case.

As the sociopath, Doc, Scott Ward Abernethy uses his voice and body to great effect to intimidate everyone he encounters. He is a frightening character, who seems not only to lack morals but to have utter contempt for them. He is overtly misogynistic, and dominates the gentler Lenny, played with honesty and depth by Ryan Tumulty.

Brianna Letourneau is Lamb, a young woman with a terrible secret. She has a mundane job, and friends (“mates”) she doesn’t really trust. She lives with her father. Her mother is dead. She and Gordy have a fragile connection, which leads the play into many unexpected and dark places. Letourneau and Stinson are central to the play, and as actors they rise to the occasion.  Their work together is powerful and affecting.

In Act Two, Lamb and Gordy are at Choeung Ek, the Cambodian killing fields, where the Khmer Rouge executed approximately 17,000 people—men, women, and children– and put them into mass graves. The actual site features a gigantic stupa (structure which holds relics, often used for meditation) containing carefully organized skulls. The Magic Tree was where the Khmer Rouge hung loudspeakers playing music to muffle the cries of their victims.

Here, the site is represented effectively by burlap and nets hanging down, with a central wooden-like core and adjoining platforms. The begging children, who frequently follow tourists, are represented by shining figures with metallic voices which almost seem like holograms.

Lamb had initially planned to go to Thailand, to the White Beach, and it is unclear why she changed her mind. Anyone who has read about the terrible suffering of the Cambodian people cannot help but be moved by the choice of venue, whether on stage or in reality. But I’m not sure why the playwright has chosen the site. True, Lamb, and Gordy are running away, and Gordy seems to be having hallucinations, but why Cambodia? What does that tell us about the characters? Gordy seems willing to follow Lamb wherever she goes. But the reasons for her fascination with Southeast Asia are unclear. Does she want to shock Gordy with the cruelties of genocide? Or is Cambodia just a convenient place to hide? Act One is a fairly realistic portrayal; Act Two is more like a dream.

The playwright seems to be exploring the line between love and violence. The Cambodian setting reflects Lamb’s bleak vision of reality, in the larger perspective of man’s inhumanity to man. It might have been interesting to know more about the Cambodians, as they had a rich culture which was destroyed again and again. They are a fascinating people, and it is too bad we have such a limited view of them in the piece. However, the play is not really about Cambodia and its tragic history.

There are many paradoxes and contradictions in the writing. People tell stories about themselves which may or may not be true, in order to manipulate others’ view of them. In the beginning, Lamb wants Gordon’s sympathy, and she reveals what she thinks will obtain it. In Act Two, when she wants him to go away, her stories become sadder and more menacing. Letourneau’s acting captures the many layers of Lamb’s personality with dexterity and flair. The play is somewhat reminiscent of A Night Out, another study of a frustrated male and one of Harold Pinter’s early successes.

Directors Matthew J. Keenan and Colin Smith have done a superb job with the script. The acting is exceptionally good, and the staging exciting and unpredictable.

Robbie Hayes’ Scenic Design is expressive and graceful, and Lighting Design by G. Ryan Smith (the rain is suggested by dappled lighting) complements it beautifully.

Sound Design, by Tony Angelini, is lovely, from the sounds of the thunderstorm in Act One to the twittering of birds in Act Two. Costume Design by Kelly Peacock is perfectly suited to the production; Lamb wears jeans and a blue dress in Act One, and a more Eastern-looking ensemble in Act Two. The men, as specified in the script, are in hoodies.

Fight Choreographer Casey Kaleba, as always, does excellent work in the brutal scenes of conflict. A special mention is due to Patrick Lord for his first-class Projection Design.

The Magic Tree is not for the faint of heart, but it will appeal to those who like David Mamet, or the brusque uncertainties of early Pinter. It is an excellent production. 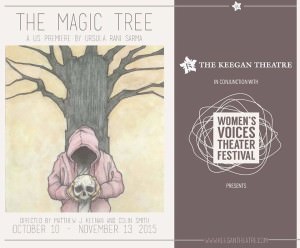 The Magic Tree plays through November 13, 2015 at The Keegan Theatre – 1742 Church Street, NW, in Washington, DC. For tickets, purchase them online.