So might read a hasty text from a self-absorbed hipster about Smartphones, the ridiculously delightful farce now playing at Mead Lab Flashpoint. Presented by Ambassador Theater in a brisk and bracing production directed by Joe Banno, Smartphones is a hilarious comedy of bad manners about our era’s inner Narcissus, whose vain reflection now stares back from a handheld screen.

Spanish playwright Emilio Williams writes with tongue drolly in cheek, except when stuck out and blowing a raspberry. Two young married couples—Amelia and Barnaby, and Dagobert and Chantal—meet up in the home of their friend Fedé, who is absent but expected imminently. The husbands are friends from high school; the wives, from college. And in an endlessly silly meta-theatrical joke, their wait for Fedé echos Beckett’s Waiting for Godot (except now and then they receive “On my way” texts from him and follow his Facebook and Twitter feeds). Also skewering their self-referential, selfie-satisfied social world is a meta-joke hyperlinked to Sartre’s No Exit (except one or another will now and then run out to buy a bottle of booze).

Fedé’s cleaning lady, Marie (Ambassador Artistic Director and Founder Hanna Bondarewska, decked out in a latex maid’s getup and yellow rubber gloves), opens the show lip syncing an operatic aria and amusingly flouncing about and flirting with the audience seated round the stage. The stark, simple set (designed along with the flashy lighting by David Ghatan) features four leather swivel chairs, a black-upholstered table, and an anachronistic green plastic telephone perched upon a red pillar.

The couples enter and banter, and each spouse carries a constantly consulted smartphone. The landline rings auspiciously but they let it go—because “nobody answers their phone anymore.” Obsessed with their  wi-fi’ed online lives, at one point the two women text a convo in the dark, their faces lit solely by their smartphones. It’s one of googobs of clever bits. There’s also a running joke about “spotty coverage”—to which they all say “ewww!” Episodically they all spaz out in weird green light and loud static, as if in dreaded disconnection from a signal—meanwhile their disconnection from one another fazes them not at all.

So outrageously and hilariously shallow are the four of them that they speak earnestly about the benefits of outsourcing their children to China for adoption. “There are things in life that a horoscope can’t prepare you for,” one of them laments. Suddenly a text message comes in. Is it from Fedé? “Oh no, it was just my fridge. I’ve got an alert that we ran out of margarine.” Banno’s program note aptly characterizes Smartphones as “‘Keeping Up With the Kardashians,’ as if written by a blogging Oscar Wilde.”

And Shravan Amin gave Dagobert bumbling charm. Because Bruce Rauscher had become unable to perform as Barnaby, Tekle Ghebremeschel stepped in and played the role on book. I can attest he did well, and the last-minute substitution did not detract the slightest from my complete enjoyment.

Smartphones is one of the smartest, sharpest satires I’ve seen. It’s also one of the shortest—the subtitle’s “pocket-size” doesn’t lie. And in its refreshing brevity is the soul of its conspicuous wit. 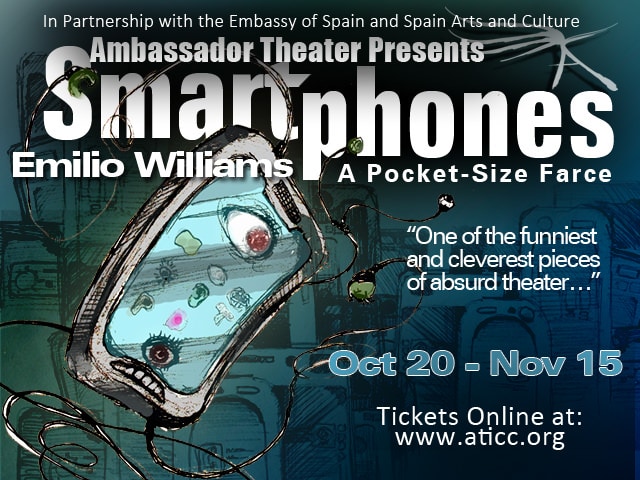 Smartphones – a pocket-size farce plays through November 15, 2015 at Ambassador Theater performing at Mead Lab Flashpoint – 906 G Street, NW, in Washington, DC. For tickets, purchase them at the door, or online.