And it does so with a mixture of hope and hard truth that is as delicate as it is engaging. You and your teenager might not leave the theatre ready to soar like Darius’s imaginary peregrine falcon “Fury”, but you’ll definitely feel the wind lift underneath your wings.

Set in New York’s Harlem, Darius & Twig is based on a novel by award-winning author Walter Dean Myers; it has been adopted for the stage by Caleen Sinnette Jennings.

Its two young African American men grow up on Harlem’s violence-torn streets, but they could be growing up on any urban street in the country. Terrorized by thugs and taunted by guns, Darius and Twig have their heads filled with dreams and no amount of bad circumstances will beat them down.

Twig’s heart pumps with desire: a desire to run faster than any other high schooler in the state.

On the other hand, his friend Darius prefers pen to feet; in fact, when challenged to run a mile he collapses three quarters through in cries of “Uncle!” Yet, Darius’s desire to publish his story drives him again and again back to the keyboard to write and re-write.

With distressed family support networks, Darius and Twig depend on each other to survive Harlem’s dangerous streets and their own internal despair.

An athletic Wilson gives Twig a simplicity of ego that is refreshing, while  Weaks’ Darius bristles with enthusiasm as he imagines his falcon righting injustice.

Their nemesis, aka Midnight, is brought to life by Kumasi, who takes on this threatening character with precision. He fills his performance with authenticity. In fact, Kumasi handles each of his half-dozen characters with equal skill.

Ms. Stokes also does a wonderful job with each of her half-dozen characters, giving each a zest and characteristic trait, particularly Midnight’s right hand Tall Boy–yes, a bit of name-irony given Stokes’ relative small stature.

Director Eleanor Holdridge handles the fast-paced script with excellent timing and visual diversity, moving characters in and off the stage without pause.

The production team is lead by set designer Andrew Cohen whose visually dazzling set invokes a paradoxical array of oppressiveness and hope, from its somewhat crowded floor space to its wide open urban sky in the background. A big basketball backboard, pole, and hoop turns out to be more iconic than practical, however, as neither teen cares much for hoops.

Lit by Johnathan Alexander and costumed by Danielle Preston, the production’s scenography adds visual depth to the play’s text.

Productions at elite theatres that address issues of poverty and violence always carry a certain amount of irony onto their stages. That irony is only more pronounced when their aesthetic beauty is based in part on the glean of sets and costumes and not on the authenticity of experience and character.

Darius & Twig suffers from some of that ironic credulity. What would the youth of Harlem think of Darius and Twig’s struggle and their world? That, we may never find out.

Running Time: 60 minutes, without an intermission. 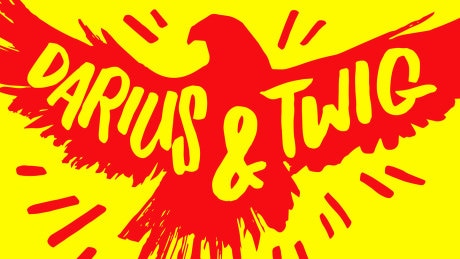