Watership Down, adapted by John Hildreth from Richard Adams’ novel of the same title, is far away from the world of reality, rich with metaphor and symbolism. Originally produced by Lifeline Theatre, Chicago, IL in 2011, Watership Down addresses such issues as religion, war, government, and free will in its Philadelphia premiere.

As a collaboration between Simpatico Theatre Project and Drexel University’s Mandell Professionals in Resident Project (MPiRP), the ensemble consisted of half Drexel students and half professionals. While that gap between students and professionals was occasionally apparent, as an audience member, it is extremely exciting to see students of an extremely wide variety working on the same stage with local professionals.

Director Allen Radway takes on a huge task of orchestrating a giant ensemble of actors in this piece. With a segmented script split up into several different narratives, sometimes the action of the show feels a little slow. The combat felt especially out of place at times. However, the overall story is moving and redemptive, and the staging was smart, using trapdoors and stairs as different locations and changes in time.

The shadow puppetry adds further youthful energy to this somewhat dark show. The intricate designs by Aaron Cromie and Lorna Howley are smart and effective for the external narratives.

Though it is advertised as “All Ages Theatre (7+),” by no means does that make it a show strictly for children. The discourse on modern society is quite articulate and most definitely for intellectual stimulation of adults with a dark undertone. Parents: do note that it is a bit bloody, but nothing much worse than what your kids have seen while watching a Disney movie. They’re still rabbits, after all.

Every single actor moved like the animal they were embodying, down to the details of paws shape, thumping, and nudging like a rabbit. The talent was displaced accordingly, highlighting standout performances from David Blatt (playing villains Threarah and General Woundwort) and Sam Sherburne (Bigwig, King Darzin)

The use of sound was utilized wonderfully in this adaptation. With the joint efforts of Live Music Coordinator Brendan McHale and Sound Design and Composition by Josh Totora, the combination of the foley sound, canned cues, and live music was perfectly suited to this storytelling. 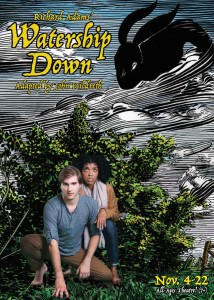 The lighting by Andrew J. Cowles gave focus to the specific scenes that needed it and pulled back when there needed to be focus on the storybook inspired projections by Janelle Kauffman. These two worked hand in hand to create the world in which these animals live.

From visually stimulating design to its excellent performances, Watership Down is a thought-provoking experience at the theater that should not be missed.

Watership Down by Simpatico Theatre Project and Drexel University’s Mandell Professionals in Resident Project (MPiRP) is playing through November 22, 2015 at the Mandell Theater on Drexel University’s Campus – 3141 Chestnut Street, in Philadelphia, PA. Tickets can be ordered online.