By the glow of a single light, nestled under the stairs on stage, pianist Eric Clark plays the overture of Compass Rose Theater’s latest production, Brigadoon. Add in bagpipes played by Christian Kriegeskotte and a cast that sings like the von Trapp players, and this is a splendid production that meddles together acting, dancing, and singing. Brigadoon is a musical with a book and lyrics by Alan Jay Lerner and music by Frederick Loewe (My Fair Lady). Lucinda Merry-Browne once again delivers with her masterful ability to cast and direct an ensemble show in a very intimate space, alongside Music Director Anita O’Connor.

The story involves two American tourists, Tommy Albright (Mike McLean) and Jeff Douglas (Lansing O’Leary), who stumble upon Brigadoon, a mysterious Scottish village which appears for only one day, every hundred years.

Albright has a natural Frank Sinatra essence that commands the stage. He is poised and confident but not overwhelming with his presence. He is charming with Fiona (Katherine Riddle), who are a lovely match. Her innocence and honesty make this couple glow on stage. Their duet, “The Heather on the Hill,” and “Almost Like Being in Love,” captures the sweetness of their romance and the hope for forever love. Riddle’s vocal talents are exceptional and multi-talented for she can sing musical theater and also cross over in to the world of opera.

O’Leary’s stage quality resembles that of Jerry O’Connell (Las Vegas, Sliders) who is a matter-of-fact fellow that has a bit of a flirtation with Meg (Megan Tatum). Tall and stunningly beautiful, Meg and Jeff are the comic-relief of the show. Tatum is aggressive with her charisma and her moves as she lingers over O’Leary. His body language is also big as he is startled and stumbles about. Tatum also exudes empathy because what gal doesn’t want to be loved? She’s just going about it the wrong way. Her solo, “The Love of My Life” is a pleasant toe-tapping number that really showcases Tatum’s singing abilities. She also doubles as Jane, Tommy’s fiancée, in New York.

The other lead couple, Charlie (Darin Lunsford) and Jean (Megan Schwartz), are a delight as they prepare for their wedding day. Lunsford and Schwartz are adorable with their varying heights as they dance and sing into each other’s hearts. “Come to Me, Bend to Me,” has Charlie serenading Jean followed by a ballet number with Jean and Girls, choreographed by Emily Frank. It is an elegant number because these gals dance flawlessly in very small space along with a great deal of passion.

The drama of the show involves Harry (Taylor Hopkins) who is madly in love with Jean (Fiona’s sister) but she rejects him. At Jean and Charlie’s wedding, Harry makes a pass at Jean.  This leaves her hurt and Charlie along with the rest of the villagers is fuming especially when Harry announces he is leaving Brigadoon. This brings on “The Chase” and unfortunately, this foils Tommy’s plans to stay and be with Fiona.

Mr. Lundie (Greg Jones Ellis) is a kooky character but is also very much needed as he explains the mystery of Brigadoon. The cross-over with space and time is done well and with a historical account that intrigues Tommy and Jeff. It leaves Tommy thinking of what is back at home and has Jeff longing to be there. Ellis plays a dual role as Archie, who is Harry’s father.

Additional villagers and cast include: Andrew, father to Fiona and Jean (Joe Rossi), Angus, head of his clan (Cameron Ashbaugh), Frank, the New York bartender (Joe Rossi), Kate, Jean’s friend (Ryann Lillis), and Maggie, fond of Harry (Elizabeth Spilsbury). Among these gifted singers and dances are the roles they play and performances they deliver support the fluidity of the storyline.

Set Designer Joseph Powell, Sr. and Scenic Painters Jane Knuth, Jo Ann Gidos, and Compass Rose Interns, create a Scottish highland with a mural of green mountains on the upstage wall with a balcony that suspends three-quarters around the theater space. This allows for unique entrances and exits. There is use of small stools for varied seating and props like a basket of flowers or a jug of “whiskey” to enhance scenes. What enriches the scenic changes is the lighting design provided by Arthur Karasek. There is use of blue and gold lighting that offers a softer tone to the set but when tragedy strikes, the lighting is a low-lit green that is dark and ominous.

Rounding out the Artistic Team are Joann Gidos, Mike Gidos, and Mary Ruth Cowgill on props and Renee Vergauwen on Costumes. The gals’ dresses were flowing plaid skirts comprised of red/black, blue/olive green, purple/blue/gold, and red/navy accompanied by white peasant blouses and matching solid colored vests. The gents were dressed in breeches (pants to the knee), shirts, and vests in soft hues of brown, black or grey. A few of the guys don plaid caps and at Charlie and Jean’s wedding they all don kilts (with something underneath). It must be mentioned that Tatum, who doubles as Jane is absolutely stunning in her red cocktail dress that emphasizes her lovely physique.

Compass Rose Theater’s entertaining Brigadoon is a real treat. It’s a wonderful combination of whimsical music, lyrical dance, and a storyline that proves that love transcends time. Brin’ th’ entire fowk. They will loove it! 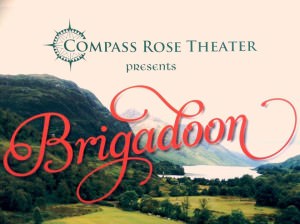 Brigadoon plays through December 20, 2015 at Compass Rose Theater – 49 Spa Road, in Annapolis, MD. For tickets, purchase them online. Parking is available in nearby garages.