September of this year marked the tenth anniversary of the Katrina flooding. ColorBlind: The Katrina Monologues, a superb play written by Tom Flannery, and directed by a great director and actor, Jivon Lee Jackson, gives voice to nine people who horrifically and tragically endured the emotional and physical pain as well as death, as a result of the levee breaking. 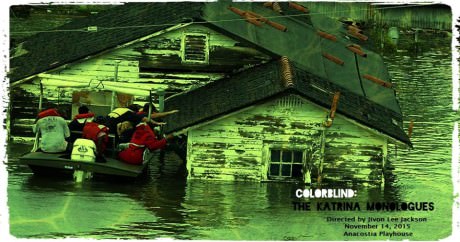 The set is not colorful, but black, with the lighting highlighting the actors, seated in various places on the stage, as they speak one by one. It opens with a trumpet player (Jonathan Neal) playing solemnly before each actor speaks.

Each story is riveting and heartbreaking:

Lady in Nursing Home (Tiajuana Roundtree), has the audience in tears as she assures herself that the son she is proud of, and works in Emergency Services, will rescue her. When told by her son after days of waiting, alone, deep in water, at the highest place she can position herself, that FEMA is coming, there is a light moment when she asks him, “Who is FEMA?  Is FEMA a male or female?” You find yourself hoping for her rescue, but it never comes.

Dead Guys #1 (Eli El) and #2 (Monte J. Wolfe) want the city of New Orleans and the U.S. Government to put aside “the political correctness,” long enough for them to care, and hopefully find and identify their bodies, under the dirty, murky water.

“A Child”(Liana Berry), who was dubbed “Little Mama,” because of the bravery she had looking out for her younger siblings, as they were separated from their parents when rescued. She was asked to write about her experience. She and her siblings were reunited with their mother in Texas.

A Woman watching On TV (Grace Garner), who is happy that her family is safe as the flood didn’t get to her neighborhood, but feels guilty about being happy as she watches the people suffer and die on television.

Man On Roof (Robert Hamilton), who will be forever grateful that his neighbor gave him an axe to chop out his attic to get to his roof for rescue.

A solider Back From Iraq (Marlon Anthony Russ), but due to the devastation of his beloved city, feels safer returning to Iraq.

The Hold Out Man (Charles Harris), “who ain’t going no where, but will give it some thought if “President Bush bring him a cold beer and barbecue.

The Photographer (Stanley Freeman), who wants to capture all the tragedy that resulted from the flood, but knows the picture of so-called “thug looters,” will be the picture that pays. There’s one moment his heart won’t let him capture-that of a young man at the Superdome, playing his violin to comfort the people.

The New Orleans Police Officer  (Kandace Foreman), who gives a wonderful perspective of the trials the police officers faced as they were affected emotionally and physically too. Foreman draws you in as she talks about not taking a baby from a mother who “begged for her help,” because after all, she was a police officer.

Seeing the devastation on the cable and local networks provided the information to the world. Watching these nine actors tell these stories puts you right there in the moment with them.

Bravo to the cast for bringing these stories to life.

Jivon Lee Jackson would be proud of his cast and production crew. I was honored to do attend and review this production. As Jivon continues to mend, heal, I continue to pray and send positive vibes his way for his total recovery.