Pericles is a night of wonder, perfect for a romantic evening or a thought-provoking night out with family or friends. Watching it is like lying in the grass watching clouds move over a beautiful blue sky; mesmerizing, brief, and final.

The original production was staged, to critical acclaim, at the Oregon Shakespeare Festival. Director Joseph Haj has restaged it for the Folger Theatre, with great success. The production casts a spell that will last. A moonlit summer night, or a starry twilight in winter, and you will think of the sea, love lost and found, and a devoted husband and father whose family is restored to him when he least expects it.

Pericles was one of Shakespeare’s most popular plays with Jacobean audiences. Acts One and Two are usually attributed to a lesser writer, George Wilkins. It is a Greek romance, narrated by the medieval poet, Gower, who included the story in his own work, Confessio Amantis (1390).

At first, we see waves; the backdrop is filled throughout with exquisite images of stars, ocean, and circling points of light. Armando Duran as Gower will be our prologue and guide on this fairytale journey. He is a gentle yet knowing presence.

Jack Herrick’s music and lyrics contribute enormously. The musicians, who are also in some cases cast members, add another touch of magic to an already spectacularly hypnotic scene.

Pericles (D.C. native Wayne T. Carr), our hero, has come to Antioch to guess the answer of the king, Antiochus’ riddle, and win his lovely daughter. As Gilbert and Sullivan said, “things are seldom what they seem, skim milk masquerades as cream” and after finding the answer (father and daughter are lovers) Pericles is no longer interested and must flee for his life. Wayne T. Carr’s Pericles is a straightforward fellow from the beginning; evil makes him indignant, and although he wants a wife and family this news disgusts him. As Antiochus, Scott Ripley wears his long hair partially pulled back, like Legolas in Lord of the Rings, and orders his minion Thaliard (U. Jonathan Toppo) to kill Pericles. When Thaliard, in a punk-style jacket and pants, arrives in Tyre, Pericles, although he is the prince of that land, has already left. Toppo’s sense of humor is infectious, and Ripley handles the difficult role of Antiochus with the right combination of false sincerity and menace.

Pericles returns to Tyre, but he is still worried. Perhaps Antiochus will come after him. After a discussion with his devoted counselor and friend, Helicanus (Michael J. Hume), he decides to escape, leaving Helicanus in charge.

Pericles goes off to sea, bringing grain to the starving people of Tharsus, where King Cleon (Barzin Akhavan) and his Queen, Dionyza, (Brooke Parks, who also plays Thaisa) seem to be grateful. He then suffers a shipwreck, and winds up in Pentapolis, where he meets three Fishermen, played by Michael J. Hume, Cedric Lamar, and U. Jonathan Toppo. They do a song and dance about how the big fish eat the little fish, which is a comic highlight of the production.

In Pentapolis, Pericles also falls in love with and marries the daughter of the local king, Simonides (Scott Ripley). Ripley is delightfully amusing as Simonides, pretending, like Prospero in The Tempest, to think Pericles a villain, while driving him and his daughter Thaisa (Brooke Parks) into each other’s arms. The music and visual poetry of the production are remarkable. So is the dancing, and the little comic touches, such as Thaisa’s embarrassment at Pericles’ two left feet, and Pericles’ huge grin when he finally gets to embrace Thaisa.

Act III begins with Pericles in yet another shipwreck, suggested by undulating blue cloth, and frighteningly realistic waves on the backdrop which rise higher and higher. We finally hear the unmistakable voice of Shakespeare, as Pericles cries, “The god of this great vast, rebuke these surges….”Thaisa, who is now his wife and already pregnant, has died in childbirth and the superstitious sailors insist on putting her body in a coffin and throwing it overboard. Pericles is devastated, but he has a baby daughter, named Marina because she was born on the sea.

Brooke Parks’ Thaisa is exceptionally expressive and full of tender mischief. As it turns out, Thaisa is not really dead, but is brought back to health by the kindly doctor Cerimon (Barzin Akhavan) in Ephesus. When she awakens she is so distraught about the loss of her family that she resolves to stay in Ephesus and become a priestess of the goddess Diana for the rest of her life.

Pericles returns to Tharsus, to Cleon and Dionyza, planning to leave baby Marina for them to raise while he goes home to Tyre. Brooke Parks is equally impressive, double-cast as wicked queen Dionyza, in a golden turban hiding her luxuriant red hair. She turns out to be the classic wicked stepmother, and plans to kill Marina for overshadowing her own daughter.

As Dionyza, Parks achieves the ice-cold demeanor appropriate to the role, and lends a unique touch of devil-may-care insouciance which gives the character a bit of humor as well, despite her dastardly deeds. As henpecked husband Cleon, Barzin Akhavan initially sports a Star-Trek like haircut with a streak of gray down the middle. He appears well-meaning but is horrified by Dionyza’s cruelty.

Marina is “rescued” from Dionyza’s henchman Leonine (Cedric Lamar) by Pirates, who kidnap her. She ends up in a brothel in Mytilene. Scott Ripley as Pandar, U. Jonathan Toppo as Boult, and Michael J. Hume as the Bawd, make a hilarious trio as they try to corrupt the pure and eloquent Marina. Her honesty and beauty confound all the customers and cause local governor Lysimachus (well-played by Michael Gabriel Goodfriend) to fall in love with her.

In a romance, the hero usually experiences adversity and loss, only to recover what has been lost and find his own, secret name Pericles is blessed with two heroines as well, the sweet and brave Thaisa, and Marina, the incomparable daughter, who is like a creature from a dream.

The recognition scene between Marina and Pericles was called by T.S. Eliot one of “ the finest of the recognition scenes”, and it is a standout in this production. Pericles, older, wracked by sorrow over the presumed deaths of his wife and daughter, has not spoken for some time. His hands tremble. As he and Marina begin to recognize one another, we hear some of the most beautiful lines in Shakespeare.

My dearest wife was like this maid, and such a one

My daughter might have been; my queen’s square brows;

Her stature to an inch, as wand-like straight;

As silver-voic’d; her eyes as jewel-like

And cased as richly; in pace another Juno;

Who starves the ears she feeds, and makes them hungry,

The more she gives them speech.

Kudos to Darcy Danielson and her fellow musicians, and to composer/lyricist Jack Herrick, for their superb work. The performances in minor roles are excellent. Jennie Greenberry doubles as Antiochus’ daughter; Michael Gabriel Goodfriend as a Lord, Zlato Rizziolli as a Lord and Sailor; and Emily Serdahl as Marina’s nurse Lychorida and the goddess Diana. Samuel L. Wick achieves triple casting as Sailor, Lord, and Pirate, and Barzin Akhavan as Cleon, Cerimon, and Pirate.

Jonathan Toppo actually attains quadruple casting, as Thaliard, Fisherman, Boult, and Man! Congratulations to all these talented and versatile actors.

Running Time: Two hours and fifteen minutes, with one intermission.

Pericles plays through December 20, 2015 at The Folger Theatre at the Folger Shakespeare Library—201 East Capitol Street, SE, in Washington, DC. For tickets, call the box office at (202) 544-7077, or purchase them online. 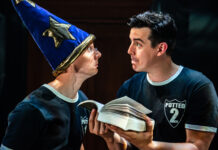