During intermission at A Christmas Story, The Musical, a woman sitting a few seats to my right marveled to me that her guest for the night had never seen the 1983 movie that inspired this musical.

“How could she have not seen it?” the woman said jokingly. “They run it 24 hours a day before Christmas!”

Well, perhaps you haven’t seen the movie either – or perhaps, like a lot of people, you have it memorized. But wherever you fall on that spectrum, you’re bound to find A Christmas Story, The Musical a delightful experience. It’s a show that transcends any limitations you might expect of a holiday show; instead of being sugary sweet, it’s smart, sometimes sarcastic, and filled with relatable characters. And it’s stocked with catchy songs and big laughs, which is about all you can ask of a musical comedy, no matter what the season.

The score by Justin Paul and Benj Pasek is terrific: the tunes are melodic and memorable, while the lyrics deftly reveal insights about the characters, from the taunting and terrors of the playground to a mother’s concern for her children. Joseph Robinette’s book captures the spirit of Jean Shepherd, the humorist whose childhood reminiscences inspired the movie: like Shepherd’s work, the script is warm and nostalgic but with an earthy underbelly.

For the hero, nine-year-old Ralphie Parker, memories of Christmas in Indiana circa 1940 aren’t always happy ones. Young Ralphie has to struggle with playground bullies, a teacher who doesn’t recognize his genius, a profanity-spouting father distracted by a malfunctioning basement furnace, and a mother who literally washes his mouth out with soap. And then there’s his longing for a BB gun, the gift that prompts every adult to tell him “You’ll shoot your eye out.” It’s tough being a kid in the world of A Christmas Story, but the anticipation of Santa’s visit makes it all worthwhile, even if disaster is always seemingly just around the corner.

If you saw the Broadway production of this show in 2012, or the engagement at the Theater at Madison Square Garden the following year, you’ll note one significant change to the script this time: a well-remembered joke from the movie, one which brought down the house in New York, has been cut here. It’s the joke about a Chinese waiter singing, and mangling, a beloved carol. That joke always made me uncomfortable, and in 2015, its time has passed. Removing it here was a good move – and by having Ralphie’s family sing the carol instead, Director James Rocco covers for its absence well. (Christopher Shin plays the fortunate waiter.)

Rocco’s direction gives all the major performers a chance to shine, and deftly blends realistic scenes with some protracted fantasy sequences – including “A Major Award,” the father’s love song to a lamp that turns into a Busby Berkeley-style kick line (thanks to Linda Goodrich’s witty choreography).

J Branson’s set for the Parker family home is richly detailed, and Mary Folino’s costumes have a wide diversity: watch “Somewhere Hovering Over Indiana,” a number sung by a group of children anticipating Santa’s arrival, and note that every child in the chorus has a completely different style of pajamas. And veteran trainer Bill Berloni provides a pair of dogs who aren’t onstage nearly enough.

Christopher Sutton is sweet and easygoing as Ralphie’s father, a.k.a. “The Old Man.” I wish he had more of a manic edge that would have made his character’s mood swings more convincing. Lyn Philistine is genial and all-knowing as the mother, and Bill Van Horn, in a non-singing role, plays author Shepherd, who narrates the action with a look of amusement and satisfaction. And Fran Prisco has a hilarious turn as a belligerent department store Santa. But of all the adults in the large cast, it’s Ellie Mooney who made the strongest impression on me – she hams it up as Ralphie’s hardhearted, melodramatic schoolteacher, then vamps it up in a knockout tap dance number.

The Walnut employs two sets of child actors to cover eight performances per week in A Christmas Story – the two actors who play Ralphie and his brother Randy, plus an eleven-member children’s chorus. Craig Mulhern Jr. played Ralphie on opening night; he alternates with Liam Keenan in the role. Mulhern is spirited and lovable in the role, and his voice is remarkably full-bodied. While he had a tendency to rush the tempos a bit at my performance – especially on lyric-packed numbers like “Red Ryder Carbine Action BB Gun” – his performance was otherwise winning. The rest of the children’s ensemble is robust, with Collin Jeffery adding winsome support as Randy (Timmy Woodward alternates in the role), and Anthony Flamminio projecting joyful menace as the bully Scut Farkus (Zach Anderson is his alternate). 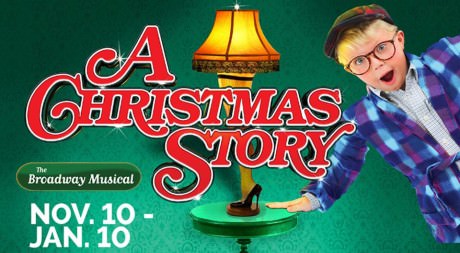