The fourth annual American Opera Initiative launched this month to sold out performances of three new works. It was a heartening look at the future of the art form – from the librettists and composers to the performers – all members or alumni of the Domingo Cafritz Young Artists Program, the renowned training program for young talent.

Director Andrea Dorf McGray, Costume Designer Timm Burrow and Lighting Designer A.J. Guban did a good job of conjuring a staged show in the chamber format creating drama out of what could have been a simple concert. The pizza hats were a particularly nice touch.

The new artists are backed by an experienced orchestra and Conductor John DeMain as well as mentors Ricky Ian Gordon and Mark Campbell, legends all, lending their expertise.

The first opera, Twenty Minutes or Less, is about a transformative pizza delivery. Sarah Hutchings has written a lilting, cinematic and playful score. The “Twenty Minutes or Less” aria is particularly fun. The libretto by Mark Sonnenblick is delightfully twisted and makes love to pizza and his characters. Daryl Freedman and Raquel González (Osha and Candice) share the closest relationship and the highest notes as the new and experienced pizza makers. González’s aria “Knead the Dough” is an intense and vocally challenging piece. Freedman’s aria “My friend Alicia says I get dressed in people” is beautiful in her powerful soprano. Rounding out the cast is Timothy J. Bruno (Damian) and Mandy Brown and Rexford Tester (Pizza Queens). Bruno has a resonant baritone for his dramatic role. Overall this was a pretty different piece of theater backed by a beautiful score that only scratches the surface of these characters.

Alexandra is a clever story of memory centered around messages left in library books. The libretto by Joshua McGuire is a poignant exploration of grief. The music by David Clay Mettens is tricky and expressive, a modern score. Leah Hawkins (Alexandra) carries the piece between two extended arias, “PS 3402” and “A single book burned.” Michael Brandenburg and Wei Wu (Alex and Ray) play lovers from years ago in a series of heartwarming duets. A clever part is when Hawkins matches both the tenor and bass parts. It’s rare to find women singing in the same range as men, and serves the story as they connect across the decades.

Service Provider is a portrait of a modern marriage, played out in texts and asides. The duet “Every Box Checked” hits every note in the libretto by John de los Santos.

Daryl Freedman and Hunter Enoch (Autumn and Beau) seem like an old married couple…with gorgeous voices. Mandy Brown and Rexford Tester (Charlene and Dallas) have very different roles than their ones in Pizza Queen. Tester’s aria about the evening specials is a thing of beauty. The music by Christopher Weiss begins and ends with a ringing cell phone and that motif continues from the woodwinds to the piano to the xylophone in a surprisingly classic score. This was just hilarious beginning to end – turning an experience we’re all painfully familiar with into art.

Overall these three operas were in very different styles – musically and thematically – but all were very promising, in turn humorous, tragic, and moving. 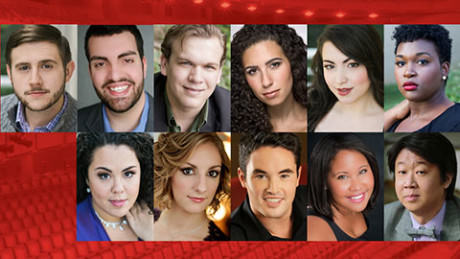