The subject of human trafficking, and especially child sexploitation, is as dark and disturbing a topic for a theatrical production as anyone could imagine. The Oven, one of the newest members of the Baltimore theatre community, is committed to presenting socially relevant works. Gone, the piece that premiers at Theatre Project this month, is a profoundly disturbing, brilliantly presented theatrical cantata that will leave you shaken and emotionally stirred.

Conceived and directed by Jackson Phippin, Gone is a performance piece. Five splendid actors become five of the most horribly abused characters ever seen in a single staging. Each of their stories is presented in a voice- over that segues into a monologue with occasional commentary from other cast members. In between there are Greek-like choruses of repetitive phrases highlighting the desperation of their collective misery. The only thing – and it’s a major thing – that keeps the audience from running shrieking out of the theatre is the sheer power of the production. It’s riveting and impossible to look away from, or to not feel incredibly touched by the performances.

Phippin has crafted a haunting script out of the pain of people who have actually lived these lives. He’s created a world that most of us are totally unaware of, let alone ever see this close up. Using a variety of techniques to convey the story, he may just be one of the most gifted directors to ever take on this kind of production. With exquisite timing, he unfolds the piece with precision. He draws the audience in from the moment they walk into the theatre to find a lone woman standing on a table in the middle of the stage, mumbling incoherently to herself. He’s making a statement and setting a tone that is relentlessly compelling. He echoes that tone with his well-executed lighting design, as well.

The entire cast is absolutely perfect in their depictions of these characters. They all have captured their characters with such depth and feeling that watching them is painful and real. Everyone on stage is spot-on in every way. Chelsea Blackwell, Sadie Lockhart, and Katharine Ariyan are all gifted performers. They share the stage with two stand-outs, Alex Shade and Clifford Doby. 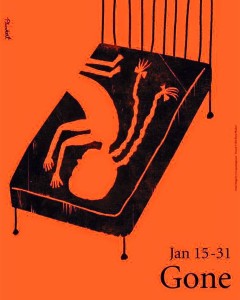 Alex Shade’s Kenny was abused by his stepfather from the time he’s 12 until he runs away from home and falls prey to bad guys who exploit him emotionally and sexually. When he says, ‘Your mind is the safest place you can be, so you have to protect it,’ he is achingly honest in his performance.

Clifford Doby is LaDawn, the southern tranny with a voice like Tupelo honey and the languid body language of an 18th century courtesan. His story is told in such matter-of-fact and dulcet timbre that, were it not for the horrific details, he may as well have been describing the life of a debutant. It’s an absolutely stellar performance by a terrifically talented artist.

Sometimes an evening at the theatre is just entertaining fun, but sometimes it’s much more than that. Sometimes, we get an insight, an education, an illumination on a subject that deserves our attentions. One that – were it not for that production – we would know nothing about. We’re still entertained but so much more than that. Gone is one of the latter.