Audrey Herman’s Spotlighter’s Theatre has once again proved why they are one of the most valued members of the Baltimore theatre scene with their production of Southern Baptist Sissies. Del Shore’s award-winning dramedy is the story of four boys growing up gay in a small, Texas town in the bosom of the Southern Baptist church. We meet the boys, their mothers, the preacher, and a couple of booze hounds who offer a lot of comedic relief and some emotional revelations of their own in this well-done production on display at Spots.

Tales of gay angst have gone rather out of fashion, being replaced with more contemporary themes. But in small, Southern towns those stories of struggles for acceptance sadly still have a resonance that Shore has mined to great effect. Fifteen years after the play’s debut, it still packs a powerful punch.

Fuzz Roark is an extraordinary director, able to coach performers and construct a production with a sure touch that never fails to deliver. Southern Baptist Sissies could have become no more than a maudlin cautionary tale in less-skilled hands.Lucky for the audience that Roark’s hands are plenty skilled enough. He and the ever-dependable Alan Zemla have dressed the stage with a well-done minimalist design. Al Ramer’s lighting design is exceptional. And the program credits ‘Fuzz Roark & Cast’ for the excellently appropriate costumes, especially on the boozy barfly Odette Annette Burnett and her aging disco cohort, Peanut.

William George holds down the dual roles of both Brother Chaffey, the church pianist and Houston, the piano playing bartender in the gay bar scenes.  Nicely played tunes from him in both guises.

Greg Grenier as Preston “Peanut” LeRoy, is a sad look at what can happen to aging gays, or anyone for that manner, who spend their nights with liquor and regrets. Shielding himself behind clever quips and snappy comebacks, Grenier plays it from the ‘go big or go home’ handbook. The audience seemed entirely pleased that he chose to go big, rewarding him with big laughs and plenty of sympathy. He’s a fine actor in a role that seems designed for him.

The foul-mouthed, hard-luck fag hag, Odette Annette Burnett is played by Melainie Eifert. This over-the-hill tart with a past full of ‘unfortunate incidents’ that she’d ‘rather not discuss’, staggers to life in Eifert’s portrayal. Sassy and dejected at the same time, she’s great in this part. The animal prints and corsets alone are worth the price of admission.

The four Southern Baptist Sissies are played by an awesome quartet of excellent actors:

Dan Romeo is Andrew, who tries desperately to be the good son and devout Christian. A neurotic mess of hope and despair, in some ways it’s his character who drives much of the action of the play. Romeo’s focused and committed performance is heartbreaking in its honesty. A curly haired cherub, he is winsome and hopeful and a perfect backsliding Baptist, fighting his demons on the one hand and gleefully giving in on the other.

Dennis Binseel does double duty as both one of the lead characters, TJ, and a gay stripper. That is particularly noteworthy because TJ is determined to deny his true sexuality and his love for one of the other guys by quoting the bible and adhering to Leviticus teachings on the ‘abomination of homosexuality’. As the stripper, Binseel is smoking hot and sexy as all get out. As TJ, he’s a tightly wrapped and repressed gay man refusing to admit his ‘situation’ is not controllable if he just prays it away hard enough. A doubly impressive performance.

On a stage overflowing with so much talent, there are two performances that are standouts. One is Tommy Malek. He plays Benny, the first one to come to the realization that he was gay, and be fine with it. Benny is smart enough to get away from the repressive environs of his hometown and escape to the big city where he could reinvent himself as the female impersonator with one of the best drag names I’ve ever heard, Iona Traylor.  Malek is a tour de force in either iteration. His performance rang the truest, never more so than in the telling of his back story. He is a powerful actor and gives a performance that audiences will remember long after leaving the theatre.

And Michael MacKay is the narrator. He presents his story and introduces us to all the others in a matter-of-fact fashion, skillfully guiding the audience, offering commentary and insight, with a professional approach that is always just right. When MacKay gets mad, we feel every twitch of his outrage at having to explain himself to the world. He becomes a horny adolescent, a spurned lover, a trumpeter of gay rights, a grieving friend, and a voice of reason. The guy can act and makes it look so effortless that it’s less like watching an actor and more as if we’re seeing into a real person’s emotions. That’s a gift.

Southern Baptist Sissies is one of those plays that spends two hours telling a tale of little hope but ends on a hopeful note. While I felt more than a little emotionally manipulated, I still teared up at the final hymn.

Powerful and moving, Southern Baptist Sissies is a story that someday won’t need be told. But as long as it needs to be, productions like this one are entirely up to the task.

Running Time: Two hours and 30 minutes, with one intermission. 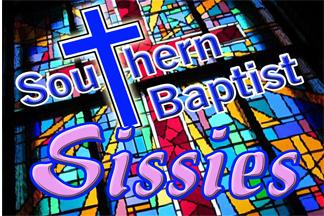 Southern Baptist Sissies plays through March 6, 2016 at The Audrey Herman Spotlighters Theatre – 817 Saint Paul Street, in Baltimore, MD. For tickets, call the box office at (410) 752-1225, or purchase them online.