On Saturday, February 27, 2016, a fortunate group of people were treated to Baritone Aaron Reeder’s one-man show Beyond the Lights: Discovering Sammy Davis, Jr., a mixture of show and lecture, embodiment and narration. The presentation was connected to the Smithsonian, Anacostia Community Museum’s current exhibit, Twelve Years that Shook and Shaped Washington: 1963-1975. 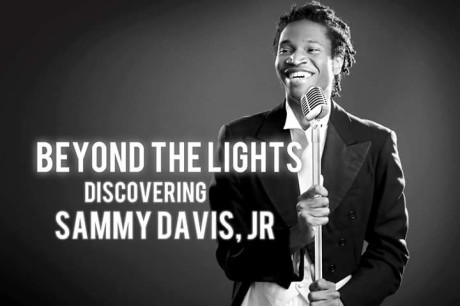 Reeder’s performance is a unique look at the life, work, and contributions of “The World’s Greatest Entertainer” to American culture. As he puts it, “Though Sammy had to deal with oppositions – race issues of his time, his lack of education, a disability, his diminutive stature, and later his religious choice; this Rat Pack member was a man who crossed barriers…through speech, song, acting, activism—being true to oneself and finding your individual path was the SDJ way of life. This lecture recital showcases how Sammy Davis, Jr. provided significant contributions to American society and culture.”

Reeder has worked with Smithsonian before in Public Programming and says that he hopes to enrich his partnership with Smithsonian Institute (and other museums and galleries) to highlight exhibitions and special displays at many locations to showcase their rich and varied collections. He promises that, along with these installations, “Patrons will be treated to lecture and musical presentations that add to their education and entertainment,”, and says that he, “hopes to transform museum exhibits to engaging museum experiences.”

As the show was about to begin, the feeling in the completely packed room was electric, and the audience was charged with energy; I would call it borderline giddy. Perhaps that is because Reeder was already on the premises, greeting his audience at the door with hugs. His fans included colleagues, friends, and community members, a truly diverse group, representing a wide spectrum of age. He was accompanied by Valerie Higgs, an intuitive and sensitive pianist and long-time friend of Reeder, and Jim Hofmann, a solid and energetic percussionist who truly added something special to the performance.

The chosen space was appropriate for a lecture performance; it had low ceilings, it was well lit, and was an exhibit in its own right, the walls containing a series of photographs. While a microphone was available, Aaron Reeder’s voice was ample enough to deem it unnecessary. With a bow tie, and double-breasted sweater, Reeder created a professional, yet friendly atmosphere.

Reeder is very comfortable with public speaking, and exudes confidence, poise, preparation, and passion. When he put on his glasses, he rounded out his image with a hint of “studious professor.” After an energetic performance of “After Today” the crowd clapped loudly, and he urged us to pace ourselves for the nearly two-hour performance.

The most impressive aspect of “Beyond The Lights” was how seamlessly Reeder weaved a sequence of interesting facts about Sammy Davis, Jr.’s life with songs that fit perfectly with the applicable story line. Each piece was skillfully integrated; the flow never choppy. In addition, he ordered the songs with a variety of tempos. We heard, among others, “Black Magic,” “What Kind of Fool Am I?,” and “Come Back to Me,” which Reeder stated was one of his favorites.

Two incredibly talented singers appeared as guest artists, including Matt Macis who joined Reeder to perform a light-hearted duet “Me and My Shadow.” They complemented each other supremely well, and clearly had a fantastic time singing together. Macis is well-known for his performances of pieces made famous by Frank Sinatra, Dean Martin, and Jerry Lewis; he was confident, charismatic, and at home in the genre.

Later in the show, a playful, poised, and sultry performance of Eartha Kitt’s “I Want To Be Evil” was performed by the delightful Jade Wheeler. Very well-spoken and polished, Ms. Wheeler slipped right into character and had the audience giggling and blushing.

One of the most exciting parts of the performance was the sense of communication between Reeder and his audience – murmurs of excitement as songs were introduced, nods of acknowledgement as he shared historical facts, and frequently bursts of laughter as he joked and spontaneously went off script. This knack for improvisation is another demonstration of just how at home and comfortable he is on stage. He went from singing to speaking with effortless ease.

Aaron Reeder is an incredibly versatile artist, easily moving between a musical theatre vocal technique, and then showing strong operatic technique in pieces from the opera Porgy and Bess, in which Sammy Davis Jr. played the character “Sportin’ Life” in the 1959 film adaptation. “I Got Plenty O’ Nuttin” and “Bess, You is My Woman Now” were crowd favorites.

Reeder explained that Sammy Davis, Jr “loathed” the song that gained him so much notoriety, “Candyman,” written for the feature film Willy Wonka. Even so, he performed it with gusto, pulling up a stool and inviting the audience to sing along.

“Mr. Bojangle” another well-known song, originally written and recorded by American country music artist Jerry Jeff Walker, was written about Sammy Davis Jr.’s friend and mentor, Bill “Bojangle” Robinson, who was a forgotten vaudeville dancer. It truly felt like he was singing to a treasured friend.

Aaron Reeder transitioned the mood to thoughtful, bittersweet, and sentimental. He was able to switch these moods from lighthearted to somber without effort. We were doubled over with laughter one moment, and thirty seconds later our eyes were misty. Reeder’s voice is warm and expressive, with an even tone, wonderful diction and range. It was nice to see such a talented performer who is at the same time humorous, friendly, and intelligent.

The afternoon left the audience feeling a tremendous sense of community, which made Aaron Reeder’s stories about the hardships and discrimination Sammy Davis, Jr. faced even more gut-wrenching.

The program ended on a high note with “I Gotta Be Me.” It seemed the entire audience connected with it, and we were left on our feet, clapping for more. A sweet encore, “All The Things You Are,” followed and received a loud ovation from the appreciative audience.

I hope we will see much more of Aaron Reeder in the DC area.

Running Time: About two hours, with no intermission.

Beyond the Lights: Discovering Sammy Davis, Jr. was performed on Saturday, February 27, 2016 at The Anacostia Community Museum – 1901 Fort Place SE, in Washington, DC.

LINK:
Aaron Reeder on Appearing in ‘Showboat’ in Chicago and in DC at Washington National by Joel Markowitz.