Hylton Performing Arts Center’s Hylton Family Series presented a one-day showing of Ladybug Girl and Bumblebee Boy, the Musical. The musical, produced by Bay Area Children’s Theatre, was a high-energy production packed with fun songs and silly dances that had kids grooving in their seats.

The musical, with Book, Music, and Lyrics by Scott Elmegreen, is based on the beloved book series by David Soman and Jacky Davis. Ladybug Girl and Bumblebee Boy, the Musical is a touring show directed by Benjamin Hanna and choreographed by Khalia Davis. 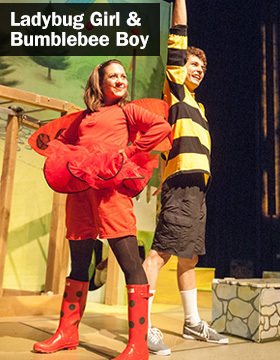 The entire production was seamless and captivating, with bright costumes and non-stop excitement. Ladybug Girl (Khalia Davis) is on a mission to be big! She helps her friend, Sam, (Nik Duggan), discover his inner bug-power and, together, they go on imaginative adventures and recruit even more bug friends to form the Bug Squad! The new team, which now includes Butterfly Girl (Leah Sangitini) and Dragonfly Girl (Isabell To), must stick together to battle the Mean Alien in disguise as Ladybug girl’s brother (Kelvyn Mitchell). The actors were all fantastic. They were energized and enthusiastic, with strong voices and dance moves.

Davis’ Ladybug Girl is all parts adorable, funny, and confident, and started off the show with the empowering song “I Can Do It.” Duggan’s Sam was a perfect match with Davis. He sings about being a hero in “Pretend I’m Great” and then joins up with Davis to become Bumblebee Boy! Together they sing the super-charged “Nothing Can Stop Us” and head off to battle their imaginary villains. Soon the Bug Squad is formed, adding Davis  (Dragonfly Girl), who sings the fun “So Many Bugs”as she tries to decide what kind of super-bug power she wants to be, and Sangitini (Butterfly Girl), who reminds the others about the importance of using your mind in “Smart Powers.

Though not an official member of the Bug Squad, Bingo, the Dog (Andrew Quick) is the definite show stealer. He never says a word (unless you count “Ruff”) but is captivating in even the smallest moments. With his coy attitude and impressive tricks, Bingo is truly the highlight of the show.

Lady Bug Girl and Bumblebee Boy, the Musical is a perfect kid’s show that had children and adult laughing for the entire show.

The next production in the Hylton Family Series will be Clifford the Big Red Dog® – LIVE! A BIG Family Musical and is sure to be a good time for the whole family.

Ladybug Girl & Bumblebee Boy, The Musical played for one-day-only on February 28, 2016 by Bay Area Children’s Theatre performing at the Hylton Performing Arts center-10960 George Mason Circle, in Manassas, VA. For upcoming productions at The Hylton, go to their calendar of events.