Ever since Rob Becker started performing a one-man comedy show called Defending the Caveman back in the 1980s, its popularity has grown steadily. And in the time since the show played a two-year run on Broadway (1995-97), it’s become quite a theatrical phenomenon.

According to the flyer I was handed when I saw the show the other night, “Today more than 50 talented actors in 45 different countries perform this record-breaking comedy worldwide.” Vince Valentine, the talented comic who is now performing it at the Bucks County Playhouse, mentioned during his curtain call that he’s now in his twelfth year of doing the show.

So, how is Defending the Caveman? Well, for the most part, it’s pretty funny. It makes some good observations about the battle of the sexes without resorting to anger or name-calling. Throughout the show, Valentine makes generalizations about the behavior of modern men and women that have their roots in traditional male/female roles dating back to caveman times. He then gives examples that illustrate his theses in humorous ways.

Some of it’s quite clever, like when he shows how the prehistoric hunter/gatherer relationship can be compared to the way men and women go shopping for clothes. And there’s a nice segment in which Valentine contrasts spending a night with his wife (“We spend five hours… talking… about… our… feelings”) to going fishing with his buddies (an afternoon spent barely talking at all). The male approach isn’t aloofness, he argues – it’s just an example of how men and women bond and communicate in different ways. And that’s the point of Defending the Caveman: it urges men and women to understand each other rather than antagonize each other.

Defending the Caveman isn’t especially profound, but it’s got the type of humor that audiences of either gender can relate to easily. The show’s observations feel earned, and they clearly resonated with many people in the opening night audience. And it’ll give you something to think about and talk about afterwards, which is always good.

But even though I hadn’t seen Defending the Caveman before, I felt at times like I had. A lot of its topics will feel familiar to anyone who’s spent decades watching American comedy. For instance, a segment about how slovenly men leave their dirty underwear on the floor reminded me of Oscar Madison’s bedroom in The Odd Couple. An introductory video where Valentine acts the part of a loutish husband by drinking milk straight from the carton reminded me of how the same scene turned up on nineties sitcoms like NewsRadio and Full House. A segment about how men and women have different attitudes about wedding invitations reminded me of a Seinfeld episode that deals with the same subject. There’s even a joke about that time ten years ago when Dick Cheney shot a guy in the face, which reminded me of any number of late night TV monologues.

The theme of Defending the Caveman – that women and men are basically two different cultures, and that we should look at each other that way if we wish to get along – is an interesting one. However, a little of Becker’s (and Valentine’s) one-dimensional, unchallenging philosophy goes a long way. By Act Two, when Valentine uses the hunter/gatherer model to explain how men and women approach housecleaning, you may wish he’d give up on his repetitive theorizing and just stick to the jokes.

Still, while Defending the Caveman may not be especially original, it’s still an appealing show. Its themes are universal, and they’re presented in a way that makes them hard to object to. And Vince Valentine is an amiable, ingratiating performer who sells the material very well. He’s constantly on the move, roaming the stage and gesturing surprise with his arms and his eyebrows; even the tuft of hair atop his head seems animated. And he approaches the lighter moments in the script with an enjoyable measure of sensitivity.

The technical aspects of Defending the Caveman are well done – the set (with primitive-looking statues and a sofa that looks carved out of rock), the lighting and the video presentation are all excellent. Even the music played during intermission – Bonnie Raitt’s “Love Me Like a Man” and Brad Paisley’s “I’m Still a Guy” – fit the show’s theme perfectly.

Running Time: One hour and 50 minutes, including an intermission. 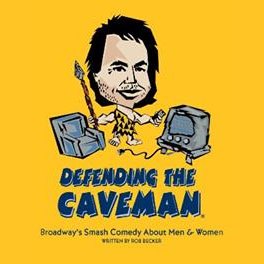 Defending the Caveman plays through March 13, 2016 and is presented by Theater Mogul, performing at the Bucks County Playhouse – 70 South Main Street, in New Hope, PA. For tickets, call the box office at (215) 862-2121, or purchase them online.