How fortunate we are in the DC area, a locale that seeks status as a world class city, to have the Ambassador Theater in our midst. The Ambassador Theater has a mission to build international cultural awareness through a regular repertoire of under-produced plays from renowned playwrights. The programming often involves connections with cultural affairs representatives from other countries to bring shows to the stage.

Ambassador Theater’s s current production, done in partnership with the Italian Cultural Institute, is Nobel Prize for Literature recipient Dario Fo’s They Don’t Pay? We Won’t Pay! (1974). The production is an amusing farcical tale of working class heroes taking revenge on the establishment after being screwed over too long by those in power. It is payback they seek; and payback they take.

Fo’s They Don’t Pay? We Won’t Pay! is guerilla political theater that draws upon the celebrated 16th century Italian carnival-like artistic style of Commedia Dell’arte and 20th century left-radical political perspectives about the solidarity of put-upon workers in their battle against the owner classes.

For those unfamiliar with playwright Fo; he received the Nobel Prize in Literature in 1997. He was cited as a writer, “who emulates the jesters of the Middle Ages in scourging authority and upholding the dignity of the downtrodden.”

Under the direction of Joe Martin and Danny Rovin, with a translation of the Italian text by Jon Laskin and Michael Aquilante, They Don’t Pay? We Won’t Pay! Is a fun house for those who enjoy absurdist sketch-art, an improv sensibility and the frantic, uncontrolled inner workings of Commedia Dell’arte with stock-characters who wear an attitude of high-jinx like a mask. The frenetic comic style of They Don’t Pay, We Won’t Pay cleverly disguises the play’s sweeping intention of seriousness until at the final curtain, the capacity to unseat the powerful through worker camaraderie becomes clear.

Martin called the play an “underclass farce” that expands upon the large repertory of “overclass farces from Noel Coward, Oscar Wilde, et al.” In his director’s note, he further indicated that the spirit of the show is “topical for time and place of the production” as the translated dialogue includes references to current some situations in the United States.

The play is succinctly described by Ambassador Theater as: “Desperate housewives take justice in their own hands… inspired by real life events of workers’ uprising in 1974’s Italy.” The characters include housewife Antonia (a likeable, colorfully portrayed, high-energy, spinning-top Hanna Bondarewska). During unrest at a supermarket, Antonia appropriates food without paying; then tries to hide the stolen items from her more law-abiding husband Giovanni (Darren Marquardt with a comical presence and a befuddled reaction to the happenings surrounding him). Antonia’s hiding place for the shoplifted food is under a coat worn by her best friend Margherita (Moriah Whiteman as a droll second-banana, fully living her stage life in reaction to Bondarewska).

From this start, there is constant physical disorder and loud verbal commotion and the rage of people unable to pay their bills because the system is set against them. The chaos only expands when Giovanni and his friend and Margherita’s spouse Luigi (Mitch Irzinski as a “straight” presence for most of the production) are made to believe in miracle pregnancies and several levels of police investigate where the stolen food might be and who might have stolen it. Peter Orvetti plays two police characters as twin-like doppelgangers; one supporting the workers and looking the other way; the one with a fake mustache who pays a price for his anti-worker attitude. Even the Pope takes some verbal hits.

The design team that transformed the black box of the Mead Lab Flashpoint into an apt setting for Fo’s wit are up to the task even on what appears to be a small budget. The team includes Set Designer Rachael Knoblauch who built a small interior apartment space and with sleight of hand brings some scenes “outside” with the first-rate assistance of Lighting Designer E-hui Woo with her use of half-light and black outs that also evocate dream sequences. Noor Che’Ree’s music/sound design is effective with mood setting especially as the show nears its conclusion with a very recognizable century old anthem to solidarity.

Costumer Sigridur Johannesdottir provides the working-class characters with the clothes needed for audiences to realize who they are. Benjamin Cunis is credited as movement consultant for the feverish, if not breathless, pace of the production.

A big round of applause goes to Set/Artist Painter Julia Tasheva, who I must assume painted what is a fantastic work of visual art, the set curtain that the audience gazes at. The painted curtain is not unlike the 1930’s Ben Shan works, some may recall once hanging in DC federal building such as HHS and VOA.

For audiences who enjoy the broad comedy of Commedia Dell’arte, and for those who want a fix of left-leaning worker solidarity in those days before the current gig economy, then a visit to Ambassador Theater’s They Don’t Pay? We Won’t Pay! will be a splendid treat.

Running Time: Two hours and 30 minutes. including one intermission.

They Don’t Pay? We Won’t Pay! plays through March 26, 2016 at Ambassador Theater performing at The Mead Theatre Lab at Flashpoint – 916 G Street, NW, in Washington DC. For tickets, purchase them at the door, or online. 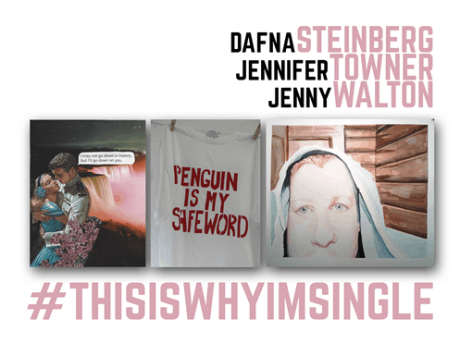 Note: Through March 19, 2016, there is a eye-popping, hoot of a visual arts exhibition at the Flashpoint Gallery in the foyer area on the way to the performing arts space. Please take a deep gander at the points raised by the works of Dafna Steinberg, Jennifer Towner, and Jenny Walton in a show called #THISISWHYIMSINGLE.