The music of Motown is a gift that keeps on giving. In 2013, Motown: The Musical wrapped up big chunks of that songbook and armfuls of personal charisma in rainbows of light tied with wide swaths of professionalism. Now Baltimore’s Hippodrome Theatre has laid that package at our doorstep for a too-brief, six-day engagement.

If folks ask you what’s going on in Charm City, tell ’em you heard it through the grapevine that there’s dancin’ in the streets.

This national tour, by the way, is slated to return to Broadway in July with a great many of the current cast. That’s another reason to reach out and say, “I’ll be there!”

Based on the autobiography of Motown founder and guiding genius Berry Gordy, this is something more than a jukebox show. Its narrative briskly moves through the milestones and setbacks of the once-struggling songwriter as he builds a recording empire with a succession of hit singles and the development of dazzling new stars like Marvin Gaye, Smokey Robinson, Diana Ross, Stevie Wonder and The Jackson Five.

It touches on Gordy’s relationship with Ross, although anyone looking for insights or substantive drama there will have to read between the lyrics. In the end the empire is torn apart by success and social upheavals, but its family of stars still have enough love left for a big reunion and a grand finale.

In Baltimore, the role of Berry Gordy is in the excellent hands of Broadway actor Chester Gregory. Gregory makes Gordy’s wheeler-dealer ambitiousness endearing with his open smile and upbeat enthusiasm. It is in his big singing solos, though, that Gregory reveals his full star power, and the real Berry Gordy has written a climactic showstopper for him called “Can I Close the Door on Love?” that stacks up to any of the current Broadway soul-barers.

Allison Semmes as Diana Ross, though, turns in the evening’s most notable performance. With near-perfect pitch and an eerily similar timbre, Semmes nails the diva’s sinuous cooing and sheer, silken joy of performing with crowd-pleasing accuracy.

Semmes handles an extended riff on “Reach Out and Touch” in Act II like a veteran showbiz trooper, even inveigling some volunteers from the audience to show their stuff. A lady from Laurel named Sabrina and a fellow from D.C. named Lester earned well-deserved cheers and ovations the night I attended. 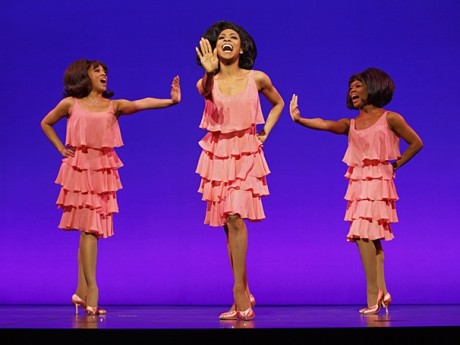 Backed up vocally by Krisha Marcano as Florence Ballard and Trisha Jeffrey as Mary Wilson, Semmes coaxes one to settle back in pure pleasure and enjoy the bouncy harmonics of “Baby Love” and the chugging locomotive drive of “Stop! In the Name of Love.” Maybe it’s time for a full-length visitation by these simulated Supremes.

Martina Sykes as Mary Wells hits “My Guy” out of the Hippodrome then goes on to prove herself another amazing powerhouse singer in a show packed with them.

Jarran Muse wins over the crowd even when singing a cappella with the plaintive “What’s Going On?” and Jesse Nager’s Smokey Robinson evokes some of the evening’s biggest smiles, whether serving as Gordy’s foil or stepping to the fore with the Miracles for “Shop Around” and “You’ve Really Got a Hold On Me.”

A 12-year-old sensation named J.J. Batteast plays the childhood Berry Gordy and the young Stevie Wonder. But it is in the role of the early Michael Jackson that he thrills the audience in “ABC” with his signature moves and 1970s funk wardrobe.

Director Charles Randolph-Wright knows where all the audience interest lies by this point and keeps the focus on what dramatic payoffs there are in the thin book. The rest of the time he is free to unwrap and share that great Motown package from Hitsville, U.S.A. In Baltimore, as the song says, it’s “Signed, Sealed, Delivered.”

Running Time: About two hours and 50 minutes, with one 10-minute intermission.

Motown: The Musical plays through March 13, 2016 at The Hippodrome Theatre at France-Merrick Performing Arts Center – 12 North Eutaw Street, in Baltimore, MD. For tickets,  call (800) 982-ARTS, or purchase them online.