America’s fascination with mobile phones, drones, and Fitbits were all parodied in the 2016 Hexagon show, but in this year of unprecedented political rancor, the group’s new revue, adeptly titled Red, White and Voters’ Blues, focused its ribald revelry on the leading presidential candidates. And some of their hilarious barbs landed with precision accuracy. 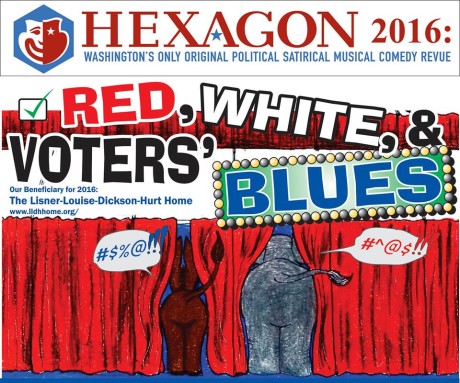 Hillary Clinton’s ambition to move back into the White House – this time settling into the West Wing – was portrayed with bloodthirsty zeal by Susan Dye in a clever first act number entitled “Homesick Hillary.” Dye perfectly captures Clinton’s cocked head, jaunty wave, and frozen smile as she preens in a signature pantsuit in front of the White House. The sly lyrics, penned by Kathy Meyer Jeffers with music and arrangement by Walter Gilbert, included Clinton’s aspirations not only to return to 1600 Pennsylvania Avenue as president, but to have an intern of her own….

By contrast, the weary Democratic electorate — workers, housewives, young people, and businessmen  — signals its lack of enthusiasm for the frontrunner in a follow-up number entitled “Holding our Noses,” (lyrics by Rick Horowitz, music and arrangement by Walter Gilbert) echoing a phrase Clinton herself has used during the campaign to defend some of her Senate votes.

The talented Willy LaHood as Bernie Sanders captured the Vermont senator’s energetic arm gestures as he danced with a bevy of gorgeous fitness trainers in the very funny “Feel the Bern.”  LaHood, crowned with a fluffy white wig, makes a return appearance later in the show during the “Democratic Debate” as a pretty convincing rapper! Music and lyrics for both were by Brandon Walker.

Of course, The Donald shows up at various times during the show, during Walker’s hip-hop inspired “Republican Debate” and again opposite Clinton in the company number “Unbelievable,” (lyrics by Joe Kaplan; music and arrangement by Brock Holmes) where all the players – each for his or her own reason – marvel at how they arrived at this point in political history.

Of the numbers satirizing our slavish devotion to gadgetry, “I Love My Phone” (lyrics and music by Richard Present, arrangement by Porter Lyon) and performed by par excellence by Ellen Kaplan, Nicholas Bashour, and Robert Teachout, was especially sharp and funny, while “Fit Bit Misfit” with Elizabeth Griffett, Chinwe Nwosu, and Jamie Sinks (lyrics and music by Lois Cecsarini; arrangement by Porter Lyon) reminds us of how easy it is to inflict tyranny on ourselves in search of super-fitness. One wishes that all the evening’s skits would rise evenly to this comic level.

The revue wound down on more serious note with “Brown Water Blues,” sung to the tune of “Wade in the Water,” a song that was once said to have been used by Harriet Tubman to advise escaping slaves to get off the trail and into the water to elude their captors. Dressed as a gospel choir, the company repurposed this powerful song as a searing indictment of the Flint, Michigan water crisis.

Along with all the topical elements in this creative show, one can also expect to see some Hexagon traditions, including a Rockettes-inspired number at the end of Act 1. “The 61 Swing,” choreographed by Ivan Davila, was danced beautifully by the women in the company, resplendent in red-spangled costumes. Newsbreaks, another Hexagon tradition, featured a team of professional newscasters (which changes with each performance) whose scripts include new – and not-so-new —  jokes, one-liners, and groaners.

Now in its 61st year, Hexagon, described as “Washington’s only original political satirical musical comedy revue,” is produced entirely by volunteers, with all proceeds going to charity. This year’s beneficiary organization is The Lisner-Louise-Dickson-Hurt Home, which provides health and life care services to low and modest income seniors of DC.

In this season of intense political drama, it is reassuring to know that talented performers, aided by the superb efforts of Artistic Director of Malcolm Edwards, Musical Director Brock Holmes, Costume Designers Linda Wilson and Jamie Breckenridge, and their dedicated staff members, are ready and willing to help us make sense of it all.

Reminding us that the election is still months away, the Hexagon cast and crew invite us to enjoy a few hearty guffaws along the way.