When walking into Tangle Movement Arts’ RetroAct at the Neighborhood House in Philadelphia, there is the immediate feeling that expectations may be defied. There is energetic music playing. Ropes and silks hang from the ceiling. Several trapeze wait, suspended, hinting at what’s to come.  Ultimately, it all feels a little less like theatre and a little more like a party of sorts. This immediately made sense when, at the top of the show, the audience is told that the production is a celebration of the company’s past five years of aerial dance theatre. Those feelings of expectation waiting to be defied are also quickly validated. Once the show begins, it is clear that Tangle Movement Arts’ brand of theatre, dance, and aerial work in concert is far more than the sum total if its parts. 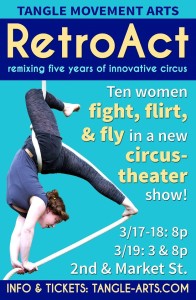 Tangle Movement Arts is “a circus arts company with a contemporary twist.” The company tells lively, invigorating stories through a mixture of circus based trapeze and acrobatics, dance and theatre.  They have been making work since their inception in 2011. RetroAct is a revival and celebration of the best of what they have come up with in the past five years, performed by a talented ten-woman cast. The evening is made up of eleven pieces, utilizing the whole of the company.

The first piece, “Waking Up With You” showcases the company’s strengths wonderfully. Performers Maura Kirk and Deena Weisberg perform the morning rituals, getting dressed and preparing for the day—all the while suspending themselves in midair, maneuvering through hanging silks and impressive choreography. It’s a simple story, but, somewhere near halfway through, it becomes apparent how mesmerizing it is to watch something so routine done in such extraordinary fashion.

What the first piece showcases more than anything, however, is the spectrum Tangle creates for themselves and operates on throughout the evening. On one end, the company has its narrative moments of storytelling. On the other, there are dazzling moments of theatricality where the women of the company create evocative images which result more in moods and feelings than representative storytelling. At any moment in the night, the performances fall somewhere on this scale, but draw from all parts of it. “Taking Root,” for instance, exemplified the evocative, abstract moments as Lee Thompson gracefully dances, balances and suspends herself in a circular trapeze.  “Elephant in the Room” also stands out as a moment of expressionistic excellence. Four performers in the air simultaneously and one lost in the crown create an intense experience more like a high flying, well-oiled machine than a choreographed piece.

Still story is not at a loss. For as much as the company wows with aerial feats, conveying a story is never too far behind. “This Time Around,” choreographed by Kate Aid and Maura Kirk tells the story of a relationship in all its awkward, joyous and blurry dimensions. While performers Lauren Rile Smith and Lee Thompson traverse stage and air, the narrative remains clear. “Rosie the Riveter” is another example, this time utilizing poignant humor to deconstruct the idea of feminism and the feminine body.

Yet throughout the evening, and in each piece, the fantastic ability of the body becomes an undeniable and welcome focal point. Over and over again the audience is taken aback when suddenly a performer is in the air, seemingly levitating around the trapeze or contorting herself around ropes in ways which simply don’t seem possible. Among the most impressive was Megan Gendell’s “Etude for Left Hand.” Gendell performed a fantastic trapeze act, flipping, twirling and hanging in every way except the expected. All of this, it is worth mentioning, with a broken wrist. Gendell never once used her right hand—which was covered in a cast—to grasp the rope or the bar. As if that wasn’t enough, Gendell ends the piece by hanging from the trapeze by the back of her heels.

It is this type of pure physical force that is matched only by the grace each performer brings to the stage. At times, watching the artists create images in the air feels like watching a canvas paint itself. The colors and forms fold over, filling themselves out and finding brief moments of brilliant suspension, only to fall back into new contours, movement and formation.

If the evening had one fault, it’s in the transitions. Some sluggish transitions keep the performances from building on one another’s momentum. While each piece is well-crafted enough to stand on its own, the evening would be taken to a new level if each one added to complete trajectory.

The lighting design should not go without mention. Lighting Designer Kae Greenberg has a wonderful eye for shadow and distortion which quite appropriately throws focus onto the architecture of the performance space and the bodies inhabiting it.

The women of Tangle Movement Arts have created an evening of excitement and beauty with RetroAct. However, the behavior of the audience speaks volumes more than any review ever could. Each piece began with the audience curious, but politely waiting. Yet, by the end of virtually every one there naturally grew a steady, sometimes uproarious underscore of “wow”s, “ohh”s and “ahh”s from the audience. This was a constant throughout the night—even to the point of spontaneous accolades, as shouts of “your amazing!” resonated from the back of the house. When an audience can’t help but speak up about the show, the experience speaks for itself.