There were 16 sets of acrobatics and each act heighten the scenes more and more:

Before the show even started several musicians on stage played beautiful Chinese music to set the mood of the show. Their musical precision fit the acrobatic acts perfectly, like the drumming building up to the climax of the scenes.

The arrival of the acrobatic performers was reminiscent of Chinese New Year parades. Several colorful Chinese dragons marched down the aisle complete with blinking mechanical eyes. Mesmerizing!!! Two men sauntered inside each dragon and they performed acrobatics in full costume. They jumped over each other and two dragons balanced on beams. The crowd enthralled at the artistry, colorful dragons, and the acrobatic feats. What a great way to start the show. It was akin to the start of The Lion King with all the performers coming out as animals of the jungle or cats.

Wine bottles balancing chairs 30 feet up in the air – while a performer did stunts on top of the chairs – was the most heart-pounding and hypnotic part of the show. The crowd gave the performers a standing ovation. Many of the audience members groaned in sheer terror afraid the chairs might give way!

The clown character performed in-between sets, and added a lot of levity to the show, which helped lessen the tension after watching the death-defying stunts. The funniest part involved him balancing eggs, which caused the crowd to scream!

There are too many incredible acts to mention! The crowd loved the humor of the male gymnasts jumping though hoops and one pretending he would crash into one of the gymnasts. A contortionist balanced small goblets of wine on her hands and feet and mouth while contorting her body. The finale featured the ensemble cast all climbing on top of a bicycling while it went in circles. The talent of The Peking Acrobats was deep and wide.

If you’re looking for a fun-filled evening to heighten your senses and bond with your family, definitely go see The Peking Acrobats, when they visit your city. Their talent is beyond compare. 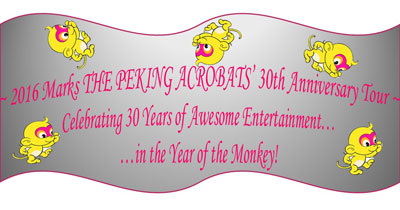 The Peking Acrobats played for one-night-only on March 25, 2016 at the Music Center at Strathmore – 5301 Tuckerman Lane, in North Bethesda, MD. For future performances and information, call (301) 581-5100, or go to their calendar of events.