Sir John Falstaff would be proud! Manayunk Theatre Company’s one-night script-in-hand-and-beer-in-the-other-hand staged reading of A Midsummer Night’s Dream was the sixth in its quarterly ShakesBEER series, with this one moved from Lucky’s Last Chance to the larger space of Manayunk Brewing Company to accommodate the growing number of followers. 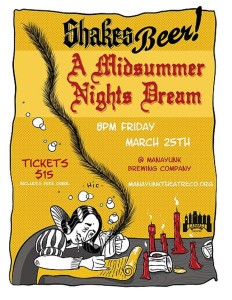 In the spirit of New York’s Drunk Shakespeare and the ShakesBeer Pub Crawl, the premise of Manayunk’s ShakesBEER: A Midsummer Night’s Dream is that the Bard’s comedies are even funnier when unlimited amounts of “sack” are consumed—or in this case, beer. So actors and audience members alike drank the night away, and the impact of imbibing became increasingly evident as the reading progressed, digressed, and transgressed! In the words of the avid tipplers who wholeheartedly partook of the event: “Da w’zza ree fud sso—ebbu’ey luddit.”

Prior to the presentation before a live audience, Director Shamus Hunter McCarty and the cast prepared for a week with a nightly read-through–or, as he called it, “a brew-through.” Though not all of the actors had beer during the rehearsals, those who did were spilling their drinks from the outset and giving every indication that the end result would be, in the words of McCarty, “a beautiful disaster.” With the final public reading came more occasions for the ensemble to guzzle their brews, as they were instructed to “drink whenever someone makes a mistake” (among numerous other times), as signaled by a bell (rung by Lisa Fischel, who played Hippolyta). And so they did. And the more they drank, the more mistakes they made, and the more mistakes they made, the more they drank . . .

But drinking was not the only twist in this intoxicated version of Shakespeare’s intoxicating comedy. Along with the copious amounts of beer consumed in A Midsummer Night’s Dream came a clever gender-bending adaptation of its script, in which cross-gender casting was employed for many of the characters (Hannah Van Sciver as Puck; Britney Leigh Hines as Oberon; Daniel Ison as Titania; and Melody Wilson, Katherine Perry, Rachel O’Hanlon-Rodriguez, and Brittnie Knight as the Mechanicals–along with Hank Curry and Geoffrey Bruen in the traditionally male roles) and the original male/female relationships were switched to same-sex couplings (with Doug Greene and John Schultz as Demetrius and Helena, and Francesca Piccioni and Danielle Leneé as Hermia and Lysander). Sean Connolly, Artistic Director of MTC (which he co-founded in 2014), explained that “Managing Director Gabriel Henninger did an undergraduate thesis called ‘Star-Crossed Dressers: Gender Subversion in As You Like It and Twelfth Night,’ so messing with Shakespeare norms was a must!”

The MTC adaptation also included direct address asides, explanations of the plot and characters in current street slang, and running commentaries and critiques on the late 16th century play’s political incorrectness, along with ad libs from the increasingly inebriated actors–all to the delight of the increasingly inebriated audience. By the end of the evening, the decibel level had also increased dramatically, lines and cues were missed, fairy wings fell off, and cast members were speaking each other’s lines and having out-of-character conversations with one another. As promised in the curtain speech, ShakesBEER is “more than just a show, it’s an experience!”

According to Connolly, the ShakesBEER series was inspired by A Play, A Pie and A Pint, the happy-hour presentations of short works that originated in the pubs of Scotland and was brought to Philadelphia by Emma Gibson of Tiny Dynamite. “Manayunk, being very rich in pubs and bars, seemed like a natural pairing with a program like that,” said Connolly, “to appeal to a broad audience of both theatre-goers and bar-goers.” Noting that heavy alcohol consumption by the cast resulted in a few incidents of dropped scripts and props in past readings, Connolly believes that it not only adds to the fun, but also “helps remind the crowd of how spontaneous a ShakesBEER performance can be.”

Prior to A Midsummer Night’s Dream, MTC tackled ShakesBEER readings of Twelfth Night, Much Ado About Nothing, As You Like It, Henry V, and Titus Andronicus (the latter two directed, respectively, by Connolly and Henninger). Coming up next in this ongoing “celebration of life, art, love, and booze” is a summer reading of ShakesBEER: The Tempest, to be followed in September by a show on the topic of “Psychology and Shakepeare’s Women” for the Philadelphia Fringe Festival.