Young Frederick Douglass (YFD), a world premiere play by Walt Vail, one of Philadelphia’s oldest and most prolific writers, is about the slave who became one of America’s most famous abolitionists. The production opens tomorrow, April 8th at 8 PM, and is being performed by Beacon Theatre Productions (BTP), at Olivet Covenant Presbyterian Church Theatre, in Philadelphia. Directed by John Mullany, the cast includes Kamili Feelings, Gregory Holmes, Jr., Katie Frazer, Warren Johns, Jr., Michael Pliskin, and Damon Zarro.

To encourage young people of all backgrounds to attend the show, BTP offers free Mentor Matinee tickets for both the adult and the youth (from the age of 12 up) whom they bring along at any of the three Sunday 2 PM performances. The theater also offers a talk back with Playwright Walt Vail after the Sunday, April 10th matinee. For more information, go to Beacon Theatre Productions’ website.

Henrik: How did you come up with the idea of writing about one of America’s most famous slaves who became a writer and an American who influenced history?

Walt: I wrote Young Frederick Douglass (YFD) after reading his autobiography—a beautifully written book that one must read to understand American History. Those who have not read it really don’t know American History.

What is Frederick Douglass’ history?.

My latest play examines Douglass’ experiences as a slave in Maryland, before learning the power of education, teaching himself to read and write, and ultimately escaping at age 21 to become one the greatest—and most inspirational—abolitionists America had ever known.

The early part of his bio treats a time when Freddy Bailey (Douglass), a slave age about 18, was sent to Baltimore as a companion to Tommy Auld, the nephew of Freddy’s owner, Thomas Auld. Tommy’s mother, Sophia Auld, had not been born in the South, and did not understand the “rules” concerning slavery. So Freddy overheard her husband, Hugh Auld, explain to her that under no circumstances should Freddy be taught to read or write.

That’s terrible. The mental torture of slavery was as devastating as the physical violence against slaves. Why did the young Douglass learn to read and write in an environment so hostile to education for people of color?

Freddy Bailey (Douglass) was very intelligent, and had asked himself, “How do the whites, who are few, keep Blacks, who are many, in servitude?” Overhearing Hugh Auld’s instructions to Auld’s wife Sophia (“Never teach a slave to read or write”), he knew immediately the answer was IGNORANCE. So he determined to teach himself to read and write.

He pushed himself and made major strides against all odds. What role did Douglass then play in US history?

He was an orator and statesman, a self-made freedom fighter who escaped slavery to become the voice of an entire people.

My play, subtitled Literacy, is the story of how and why he accomplished his goal of learning to read and write. Writing it is influenced by the fact that I am a teacher by profession, as well as a playwright. I want people, particularly the young as well as their parents, to understand the value of literacy through the play.

What did you discover as the reason slave owners deliberately kept slaves in the dark and punished them if they tried to learn to read and write?

Douglass overheard Hugh Auld say that reading would cause slaves to become malcontents, and never be happy in bondage, which Auld claimed was “God’s will.”

What, ultimately, was the essence of slavery for Douglass?

Douglass called his work, “A direct route from slavery to freedom.” I am defining his word “slavery” broadly: it can mean many kinds of ignorance.  Many people today are still enslaved by ignorance.

How did you handle the whole lifespan of Frederick Douglass—from a young slave to a mature older abolitionist?

I use an adult Douglass as narrator and a young Douglass as the developing character. But I end the play with the attainment of freedom. The rest of the life story is another play.

Beacon Theatre Productions [BTP] is an energetic, but fairly new theatre company in Philadelphia, featuring socially aware and thought-provoking dramas. How did they find out about your latest play, Young Fredrick Douglass?

Beacon Theatre previously produced a one act of mine (Silent Night) and did a great job.

Your Next Projects as a Playwright?

Although you will be 89 years-old this December, you are still writing one play after another. What is your latest work in progress?

I’m currently working on a new comedy, The Idea Man. I’ve processed drafts of it through the Neil Simon Festival in Oregon—they’ve sent extensive comments on each of the first two drafts, and I’m on the third draft. I’m hoping it gets more active and funnier with each draft.

You were a widower for many years until you met Joy Winston, who, like you, loves theatre.

Joy and I are doing well. She and I read each draft aloud, and I get the female point of view.

I can’t wait till I meet both of you and Frederick Douglass. I am also looking forward to speaking with BTP’s President Georgina Bard, who produced your play, and the cast and the artistic team.

And I am very much looking forward to meeting the Mentors who are bringing along a young person to witness the struggles and the triumphs of this amazing American. 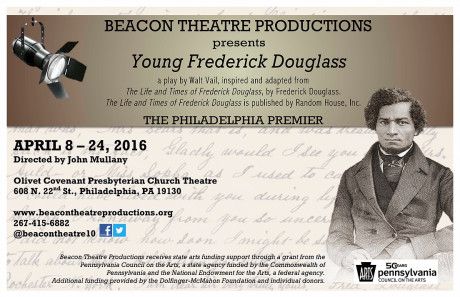 LINKS:
Reflections on Playwriting: A personal interview with Walt Vail, one of Philadelphia’s most experienced playwrights by Henrik Eger on Drama Across the Globe and on Phindie