Traditional ballet gets the “shaken, not stirred” treatment in Cocktail Hour: The Show, a unique piece produced and performed by New York company  Ballets with a Twist, and presented by Bucks County Playhouse. By turning expectations on their head, choreographer Marilyn Klaus creates a series of short but memorable dance vignettes, each named for a classic cocktail, some more familiar than others. 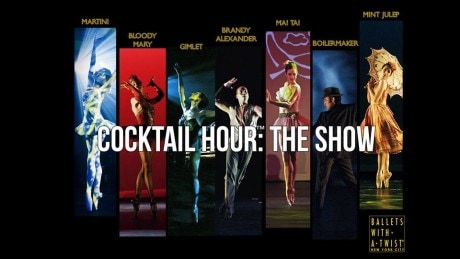 Danced by a company of thirteen, the quickly-paced and well-crafted program touches a wide variety of genres, starting with the steamy “Brandy Alexander” and ending with a soulful “Holy Water” with a “Bloody Mary,” “Manhattan,” “Gimlet,” etc. mixed in between. The company’s premise is to create a signature blend of glamour and excitement in innovative ways through original choreography by Klaus and music by Stephen Gaboury. While there is a distinct brand of creativity throughout, some pieces are more confusingly constructed than others, weaving together an uneven event.

Klaus’ style is uniformly unpredictable and has a simplicity that excels in the larger company numbers. One standout piece, “Singapore Sling,” closes out the first half of the evening. Keeping with a more classic ballet style with an Asian twist, all five dancers are en pointe and moving in small staccato motions that connect with fluidity. The hypnotic stringed music and elegant touches call to mind a group of geishas in performance, twisting fans, and bowing gently, but in light tutus rather than majestic kimono.

Another strong showing from the group, “Eau de Vie” utilizes almost the entire company in ornate golden accoutrements and delicately passing letters between couples. Klaus moves the pairs through a complex road map with exuberance and joy, one of the more cohesive pieces featured in the evening. Again, the choreography melds with an intricately beautiful piano soundtrack, erring closer to what you may see in traditional ballet but with a respectful tilt here and there.

But while some numbers triumphed, others served up a more kitschy and comical style that did not always cohere as I might have hoped. Some numbers caused much more dissonance, such as “Holy Water,” where slightly sensual movements and glamorous sequined dresses were mismatched with an almost heavy-handed evangelist music and baptism theme. Similarly, “Martini” combined a Bond-style heroine in tutu and pointe shoes with black-clad assassins, but one too many finger guns pushed the piece more in the territory of overwrought, rather than a taste of glamorous danger.

Well-performed by the entire company, the pieces tended to underutilize the male dancers, with the exception of “Cuba Libre” – a sexy ballroom-style duet with tasty Latin flair. In general, solo numbers, were well-performed but often too short to be fully realized.

Overall, Catherine Zehr’s costume design buoyed much of the concept, with elaborate touches when necessary and an admirable attention to the theme of each individual cocktail composition. Projections by Shane Rutkowski added flair and fun to the introduction of each piece, further communicating the subject but sometimes distracting from the dancers by adding too much movement behind them. Lights by Dan Hansell boosted each element and highlighted the talented dancers in a variety of looks.

Cocktail Hour: The Show never claims to be a reverent treatment of ballet, but rather becomes a fun-filled and whimsical take on the combination of many styles. If you’re looking for something lighthearted and frothy with a slightly goofy twist, Cocktail Hour will leave you tipsy.

Running Time: 90 minutes, with an intermission.

Cocktail Hour: The Show has one more performance today, April 10, 2016 at 2 PM, and is being presented by Ballets With a Twist, performing at Bucks County Playhouse – 70 South Main Street, in New Hope, PA. For tickets, call the box office at (215) 862-2121, or purchase them online.