The Arlington Players (TAP) is taking on the feel good musical, Nice Work If You Can Get It. The book is written by Joe DiPietro with music and lyrics by George and Ira Gershwin. The musical is based on material by Guy Bolton and P.G. Wodehouse.

Preview performances began at the Imperial Theatre on Broadway on March 29, 2012 with the opening on April 24, 2012. It closed on June 15, 2013, after 478 regular performances. The Broadway production was directed and choreographed by Kathleen Marshall.

According to Broadway.com, here is a synopsis of the show:

Nice Work If You Can Get It is the story of charming and wealthy playboy Jimmy Winter, who meets rough female bootlegger Billie Bendix the weekend of his wedding. Jimmy, who has been married three (or is it four?) times before, is preparing to marry Eileen Evergreen, a self-obsessed modern dancer. Thinking Jimmy and Eileen will be out of town, Billie and her gang hide cases of alcohol the basement of Jimmy’s Long Island mansion. But when Jimmy, his wife-to-be and her prohibitionist family show up at the mansion for the wedding, Billie and her cohorts pose as servants, causing hijinks galore.

The show is produced by Barbara Esquibel. John K. Monnett serves as both director and choreographer for TAP’s production and did a phenomenal job with both. He has some incredibly talented dancers, singers, and actors to work with, and they all deliver fine performances. And even though it’s a long show, the pacing was quick and show moved briskly.

TAP’s production has some of the best dance sequences that I’ve seen in quite some time. They even made me want to become a tap dancer – and that’s saying a lot. You could tell how much time time and effort Monnett and the entire cast put into the dancing, and they looked blissful doing it. My favorite choreography was during “Sweet and Lowdown”,”Fascinating Rhythm,” and the Finale.

I was so impressed by the very quick scene changes, which is so important for the timing of it all. Kudos to the great backstage crew, who pulled this off.

Music Director Steve Przybylski has a wonderful orchestra to work with, and they sound magnificent – like they have played together for years. Vocally, the leads and ensemble were fabulous. Congrats to Przybylski for making them sound so good.

Dave Moretti has designed a gorgeous set.The long Island estate was especially glorious both inside and out, and had a spectacular outdoor backdrop. The bedroom had a beautiful wood carved bed and had an added touch with the stained glass lamp on the side table. Moretti used painted brick a lot, which worked well during the speakeasy scenes.

The lighting design by Jeffrey Auerbach was really effective, setting the different moods well. Grant Kevin Lane’s costume design reflects the twenties era perfectly, creating very colorful and whimsical dresses for the women. The bathtub outfits for the bubble girls had a little extra something that added to that scene. He also did a great job making Billie look like a tomboy. The hair design by Serge Notkid was quite good in capturing those specific twenties hairstyles. The crisp sound design was by Drew Moberley.

Maureen R. Goldman plays Billie Bendix, a bootlegger, and what a triple threat she is. Her portrayal of Billie was so engaging to me in every way, and she is a fantastic dancer too. I won’t give it away, but you will never see or hear “Someone To Watch Over Me” the same way again.

Christopher Smith plays Jimmy Winter, and those of us who have seen him perform before know that he can do it all. He has a flawless voice and is quite a good dancer and actor. He plays a very convincing drunk in Nice Work If You Can Get It. I didn’t see much chemistry between Smith and Goldman at my performance, and I know that will improve as the run progresses.

One of the more humorous couples is Jeannie Muldoon, played by Katie Mallory, and Duke Mahoney played by Sterling Beard. They had me laughing during “Blah, Blah, Blah.” Mallory is a great dancer, singer, and actress. Beard is also comedic but possesses this innocence that’s endearing. Eileen Evergreen is played by Kate Collins Brown. She portrays the wealthy, stuck up society girl to a tee. Her soprano range is impressive and she sounds beautiful during “Delishious.”

Jack Stein steals the show as Cookie McKee, and his comic timing is impeccable. He also transforms back and forth between characters with ease.

Melanie Jennings-Bales plays Duchess Estonia Dulworth, and is a force to be reckoned with. Bales has a wide vocal range that is very powerful. One of my favorite numbers in the show was “By Strauss,” sung by Bales coinciding with “Sweet and Lowdown,” sung by Stein.

There are some very memorable supporting performances, including Mike Usowski’s Chief Berry. He rounds out the trio of Smith and Goldman singing “Let’s Call The Whole Thing Off” in a hilarious way.

Senator Max Evergreen is played by James T. Pearson. He plays the stern father to Eileen but also has some surprises in store. Judy Lewis’ Millicent Winter doesn’t get much stage time but really makes the most of it, and her performance packs a punch!

The Chorus Girls and The Vice Squad are phenomenal dancers and singers in their own right. Each person really makes an impact during his and her limited stage time.

The Arlington Players’ incredibly entertaining and joyous Nice Work If You Can Get It is an all-around spectacular show and deserves sold out houses. I would be surprised if you are not tappin’ your feet throughout the show and humming “Fascinating Rhythm” on your way out the door.

Nice Work If You Can Get It plays through April 23, 2016 at The Arlington Players performing at the Thomas Jefferson Community Theatre – 125 South Old Glebe Road, in Arlington, VA. For tickets, call the box office at (703) 549-1063, or purchase them online. 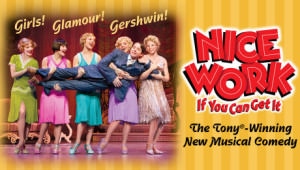