There are few plays in the Shakespearean canon as beloved as Twelfth Night. It’s a comedy that uses mistaken identities, trickery, and a healthy dose of romance to captivate its audience. And it’s one that’s revived with such regularity that if you go to the theatre a lot, you’re bound to run into it sooner or later.

The Philadelphia Shakespeare Theatre is now presenting Twelfth Night in a version that’s a revival of Director Carmen Khan’s fine 2012 production. And if you’ve never seen Twelfth Night, this new edition is a terrific place to start. It’s got a lot of visual wit, a lot of strong voices, and a lot of heart.

Some of the design elements from 2012 are back, including Vickie Esposito’s classy, era-defying costumes, Fabian Obispo’s lovely, melodic music, and Michael Cosenza’s raucous, amusing fight direction (done in collaboration with William LeDent this time). And it’s got Rob Kahn returning to the role of Malvolio, the solemn servant who does his utmost to maintain his dignity even as he’s being humiliated.

Kahn is superb, especially when he’s deceived into thinking that his employer, the lady Olivia, is in love with him: he forces himself to smile – perhaps for the first time in his life – by taking two of his fingers and forcing the edges of his lips upwards. In Kahn’s interpretation, Malvolio is the proper gentleman who is also properly ridiculous.

Malvolio gets some formidable opponents in the trio of jokers who pull that trick on him: William LeDent is blissfully blotto as Sir Toby Belch, who lives up to his surname; John Zak is endearingly befuddled as Sir Andrew, with unkempt hair that points in nearly every direction, hinting at his confusion; and Jenna Kuerzi is saucy as the maid Maria.

There’s also a confident turn from Adam Kampouris as the jester Feste, leading the musical numbers on mandolin and livening up comedy scenes with handstands and somersaults. And Eric Van Wie returns from the 2012 production, though this time he’s switched from playing Sir Toby to the noble, outraged servant Antonio.

But the core of Twelfth Night is the quartet that makes up its romantic roundelay. There’s the fair maiden Viola; her employer Count Orsino, whom Viola longs for; the Countess Olivia, who is pursued by Orsino but falls for the servant boy Cesario (who is really Viola in disguise); and Sebastian, Viola’s lookalike brother, who has gone missing but shows up just in time to throw everything into turmoil.

Got all that? Don’t worry, you will in this production, which presents every twist and turn with clarity. Deaon Griffin-Pressley makes for a brooding, romantic Orsino, while Julia Jensen Ray is sensitive and sympathetic as Viola. The scene where Orsino and Viola (disguised as Cesario) lie in the same bed listening to music works well here, his casual comfort contrasting nicely with her mounting anxiety. Elise Hudson is quite funny as Olivia, trying hard to mask her giddiness over her new love and never succeeding. And as Sebastian, Josh Kachnycz mixes toughness and comedy with a pleasing dexterity.

One element of this Twelfth Night is a big improvement on the last version: the relationship between Viola and Sebastian. One of the plot’s major points is that Viola and Sebastian look so much alike that no one can tell them apart; but in the 2012 version, the two actors were about six inches apart in height and had completely different appearances. It ruined the joke.

This time around, Khan has cast two actors (Kachnycz and Ray) who are about the same height, with similar coloring. Do they look so much alike that they could be confused with each other? Well, no – nobody in their right mind would ever think that Ray was a man. But that doesn’t matter; at least this time they look enough alike that we can see why somebody else might confuse them. And in the fanciful world of Twelfth Night, that’s all that matters.

Running Time: Two hours and 45 minutes, including an intermission. 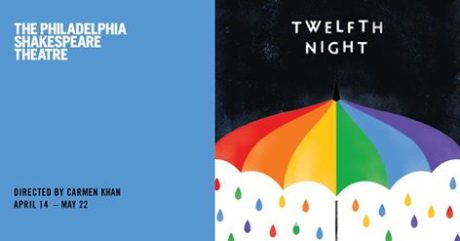 Twelfth Night plays through May 22, 2016, in repertory with Macbeth, at The Philadelphia Shakespeare Theatre – 2111 Sansom Street, in Philadelphia, PA. For tickets, call the box office at (215) 496-8001, or purchase them online.