Both E.L. Doctorow’s 1975 novel, Ragtime, and the musical adaptation of the same name, with Book by Terrence McNally, Music by Stephen Flaherty, and Lyrics by Lynn Ahrens, currently playing at Memorial Episcopal Church in Bolton Hill, begin with the same evocative lines:

“In 1902, Father built a house at the crest of the Broadview Avenue hill in New Rochelle, New York. And it seemed for some years thereafter, that all the family’s days would be warm and fair.”

On the surface, Ragtime is the story of one family and how they live and change, especially after they find a newborn African-American baby half-buried in their garden and take him and his mother into their home. But at a deeper level, it is the story of America in the early days of the twentieth century: an epic sprawl of history and culture as interpreted through the eyes of one small, strange boy named Edgar.

The cast and production staff of the Memorial Players’ Ragtime manage to convey both the sweeping panorama and the whimsical charm, while underscoring how many of the issues being addressed in the musical continue to be painfully relevant today.

Father Grey Maggiano, the rector of the church, makes this clear in his comments in the program, expressing his wish that audiences will:

“find [themselves] challenged…to consider how you can begin to live your life differently so that in five or ten or 20 years, Ragtime will feel more like a story from another era and less like a commentary on modern society.”

Skillfully helmed by Director Bill Kamberger and Producer Stacy Wells, everything is professional quality, starting with the set design. Because the production is being performed in the church sanctuary, there are idiosyncracies about the space that cannot be changed. The stage is narrower than it is deep, and is backed by a large sacred mural with a huge metal cross overhead. There is one aisle that leads from the back of the sanctuary to the stage and what appear to be very limited wings and backstage space.

Set Designer John Seeley addresses the space issues through the adept use of scrims masking the mural and de-emphasizing the cross (except during one scene in which their presence comes in very handy). Multiple frames of PVC pipe draped with fabric created wings on stage right, allowing cast members and larger props and set pieces to move in and out unobtrusively. In addition, in an ingenious touch, the fabric could be changed depending on the mood of the scene being performed, simply by sliding it back and forth.

Permanent set pieces were minimal, consisting mostly of a moveable raised platform with stairs and a railing that could be raised or lowered as needed. In addition, a screen hung stage left, onto which historical photos illustrating the action on stage were projected. As a result, the set serves largely a tool, rather than another character, allowing all of the audience’s focus to remain on the actors.

The costuming by Beth Ratrie and Rosalyn Kooser is lovely and historically appropriate. This is a show with a large cast that takes place over an extended period of time, and therefore requires a multitude of costume changes. The costume team accomplishes this at a high level of quality.

Also of note is the lighting. While most of it is simple and designed merely to enhance the mood, there are a few effects of startling beauty. In one scene, one character appears to another in a dream sequence and when they disappear, Lighting Designer Daryl Beard employs a lighting technique that essentially turns them into a figure in a black-and-white film, fading back slowly to disappear into the background.

The orchestra led by Orchestral Director Tim Viets is stellar, rivaling orchestras one might hear at a venue like the Hippodrome. The very fact that a production this musically intensive is utilizing a live orchestra at all is a pleasant surprise, as often community theater companies opt to use pre-recorded music. And it was a choice that pays off tremendously here.

However, on the night that I saw the show, there was some difficulty balancing the voices onstage with the fullness of the orchestra, occasionally resulting in lost lines from cast members who were not wearing body mics. In fact, the quality and consistency of the sound was a problem throughout my performance, as mics faded in and out, were turned up too high, producing feedback, or were not turned on in time to catch characters’ entrance lines. It is a testament to the strength of the performers that these issues were merely a distraction, and did not detract substantially from our enjoyment of the show as a whole. And I am confident that these problems were resolved before the next performance.

Ragtime is not a show one casts for dance ability; however, Choreographer Timoth David Copney does wonders incorporating dance and movement into the production, despite the small performance space. There is leaping and spinning and cakewalks and soft shoe and waltzing with ghosts: none of it standing up and announcing itself as “choreography,” but simply fitting in with the rest of the action on the stage.

In the opening number, “Ragtime,” groups of newly arrived immigrants, Harlem denizens, and upper middle-class suburbanites warily circle each other while clumped in frightened, little bunches. They walk amongst each other, bumping into one another in the street, and in the end, are still lined up rigidly in their homogenous groups. It is a powerful moment and one that is most reflective of the parallels between social issues in the early twentieth century and the present day.

Director Kamberger’s cast was clearly carefully chosen, and is made of up an even mix of experienced stage performers and members of the Memorial Episcopal congregation who clearly enjoy participating in the annual musicals for fun and as a way to bond with their families and fellow church members. Kamberger, along with Vocal Director Gregory Satorie-Robinson, melds these groups seamlessly. Ragtime is a largely sung-through musical without heavy amounts of dialogue, and Satorie-Robinson has coaxed complex harmonies and strong dynamics from the ensemble.

Bill Kamberger’s direction results in realistic, multilayered character portrayals, even from minor unnamed characters and the youngest cast members. While the entire cast is a strong one, there are particular standouts to look out for. Three members of the same family give outstanding performances. Stuart Deininger as Edgar, our narrator, does a wonderful job of conveying his character’s curiosity and wide-eyed wonder at everything that is going on around him, as well as a level of quirky mysticism that is dismissed by his family as mere oddness, rather than true precognition.

Stephen Deininger as Tateh brings a fierceness and unexpected sly humor to his portrayal of the Latvian immigrant whose strongest motivation is a better life for his mostly non-verbal daughter (Kenna Mitchell), as he emotionally sings in the hopeful song “Gliding.”

Samantha McEwen Deininger (Sarah) matches a beautifully expressive voice (especially in the heart-wrenching solo “Your Daddy’s Son”)  with an impressive emotional range that takes the audience with her through merriment, anger, despair, joy, pain, indecision and so many other stops in between. Husband and wife Stephen and Samantha Deininger have both played these parts before, and their thorough knowledge of their characters shines through in their current performances.

John O’Brien (Edgar’s Father) brings credibility and a certain poignant vulnerability to his portrayal of a man too restless to stay at home, but too hidebound to be changed much by his extensive travel adventures. Everything keeps changing around him, including those closest to him, and his bemused confusion in numbers like “New Music” and “What a Game” is both funny and touching. At the other end of the spectrum, Mother’s Younger Brother, played by Charlie Roberts, seems to wear all of his nerves on the outside, jumping from celebrity worship to political activism as his impulses and emotions compel him. Roberts has a sweet, powerful singing voice that enhances his performance.

As Edgar’s Mother, Ginny Hornbeck is outstanding, an appealing mix of sweetness and steel who undergoes a believable journey from protected trophy wife to determined individualist over the course of the three hours of the show. Mother believes that everyone is deserving of courtesy and dignity, and that is conveyed in every moment Hornbeck is onstage and in her interactions with every character with whom she comes in contact – even the father of the illegitimate “little Negro baby who lives in [their] attic.” She delivers a powerful rendition of “Back to Before.”

As that father, Corey Dunning (Coalhouse Walker, Jr.) is a delight. His rumbling baritone rings out on songs as diverse in tone as the funny, flirtatious “His Name Was Coalhouse Walker/Getting’ Ready Rag” and the hopeful, inspiring “Wheels of a Dream (sung beautifully with Samantha McEwen Deininger).”

Coalhouse is an itinerant ragtime piano player, who is also a devotee of the writings of Booker T. Washington. As a result, Dunning incorporates both a sly charm and a measured, quiet dignity into his character. The more obstacles are placed in Coalhouse’s path, the calmer and more articulately clipped he becomes, even when the course of his life is irreparably changed. It is a bold acting choice: where others might opt for overt rage, Dunning’s steely determination is mesmerizing.

One of the idiosyncracies of Ragtime, and one that often comes in for critical drubbing, is that the central family comes in contact with a number of famous historical figures, despite living in sleepy New Rochelle. While perhaps not terribly realistic, I thank this conceit for providing the opportunity for some lovely featured performances in this production. As labor organizer Emma Goldman, Kendra Sweren Keiser is sharp, sarcastic, fierce and mordantly funny.

Sally Ratrie’s performance as Evelyn Nesbit in “The Crime of the Century” is charmingly awkward, as a woman famous chiefly for her beauty and love of wealthy men — one of whom killed the other — who became a vaudeville star on the wave of resulting publicity. Equally charming if more suave is Jeff Tegeler as escape artist Harry Houdini, while Jesse Milan, Jr., as Booker T. Washington, matches a barely masked anger with determination and resolve.

Among a uniformly excellent ensemble, I would be remiss if I did not mention the trio of J. Purnell Hargrove, Myles Jayden Muse, and Tyler McKay White, who bring a youthful excitement and a deadly seriousness to their mostly silent roles as Coalhouse’s gang in Act II. Their faces and reactions as they prepared to return to their ordinary lives lent all the more power to Corey Dunning’s stirring rendition of “Make Them Hear You.”

In addition, Renata Hammond, as Sarah’s Friend, is a surprise revelation. Her soaring solo in “’Til We Reach that Day” at the end of Act I brought much of the audience to tears or to their feet, or both. Brava, Ms. Hammond.

The Memorial Players’ Ragtime superb production of Ragtime is not to be missed! 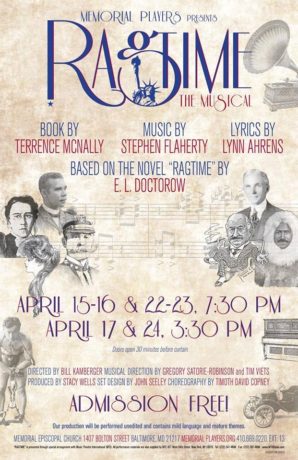 Ragtime plays through April 24, 2016 at Memorial Players performing at Memorial Episcopal Church – 1407 Bolton Street, in Baltimore, MD. Admission is free, and donations are welcomed. Tickets are not required, as seating is first come, first served. Information on Memorial Players pre-show receptions (which include VIP seating for the show) can be found here.