From Handel’s Giulio Cesare to Donizetti’s Anna Bolena to Adams’ Nixon in China, real-life historic figures have often been the subjects of operas. The multi-talented actor, singer, composer, and songwriter Andrew Lippa has continued that tradition with his groundbreaking “concept opera” I Am Anne Hutchinson/I Am Harvey Milk, which had its world premiere at Strathmore this past weekend. Lippa not only provides the words and music, but also performs on stage where he is joined by the incomparable singer and actor Kristin Chenoweth. They, along with Stage Director Noah Himmelstein, Music Director and Conductor Joel Fram, and Choreographer Larry Keigwin combine their impressive creative talents to produce a glorious and stunning musical experience.

Act I tells the story of Anne Hutchinson, a 17th Century wife, mother, midwife, and self-appointed preacher in Massachusetts, who is played to perfection by Kristin Chenoweth. Hutchinson was an important figure in colonial American history for two reasons: first, she refused to stay in a “woman’s place,” and second, she refused to abide by the doctrine of the Puritans who ran the Massachusetts Bay colony. For these reasons, and her refusal to stop defying the colony’s leadership, she was banished and fled to Rhode Island, where she believed there would be more religious freedom.

However, even in Rhode Island the Massachusetts Puritans had a great deal of influence, so Hutchinson moved to Dutch-controlled New Netherlands, where she lived near what is today the Hutchinson River in the Bronx. In 1643 a group of Native Americans with grievances against the Dutch attacked Anne Hutchinson’s house, killing her and most of her children. The one child who survived had many descendants, including three U.S. presidents.

Act II provides a non-sequential, episodic look at highlights in the life of Harvey Milk, impeccably portrayed by Andrew Lippa. Harvey Milk is an icon of the LGBT movement. As a member of the San Francisco Board of Supervisors, he was the first openly gay man to be elected to office in California. He was a charismatic figure and assisted the gay community in organizing and achieving political influence. A canny politician and a fiery orator, Milk succeeded in the passage of a strong gay rights ordinance. In 1978, after barely a year in office, Milk was shot and killed and became a martyr to the cause of gay rights.

Chenoweth’s lovely and pure soprano voice and striking vocal dynamics allow her to become Anne Hutchinson with all the fire and passion that goes with that character. When she sings the triumphant “Sunday Morning” she exudes a quiet confidence and a strong will that is thoroughly compelling. When Governor John Winthrop (Andrew Lippa) invites Hutchinson to sit down and she refuses, Chenoweth defiantly sings “The Chair” as the Governor tries to debate strictly held Puritan religious tenets.

Fifth-grader Colin Wheeler plays Samuel Hutchinson, one of Anne’s twelve children. As he leads the cast in “Who is Anne Hutchinson?” Wheeler demonstrates a poise and stage presence comparable to a much more seasoned performer. In “These People” the 16-member onstage men’s chorus and turns in a bravura performance with full, rich harmonies and precision dance moves. When Hutchinson is found guilty, she explains that she is not afraid because she has God, and Act I concludes with the rousing hymn “Cast in Heaven.” The Alexandria Harmonizers added beautiful vocals throughout.

In Act II, with Lippa as the adult Harvey Milk, Wheeler plays Milk as a young boy. Chenoweth plays a smallish role which is credited simply as Woman.  The older and younger Milk characters sing a duet on “An Operatic Masterpiece”.  Then, Milk’s assassination is depicted in “I Am the Bullet” with the splendid onstage chorus performing in military style, while another male chorus numbering at least 110 singers from The Alexandria Harmonizers performs above the stage.

“Friday Night in The Castro” is a dazzling, pulsating production number that absolutely stops the show, complete with a glittering disco ball that bathes the theatre in tiny specks of light. Later, Chenoweth returns as Anne Hutchinson who teaches us to “Leap” before we look in a lively rock and roll number, and the entire cast performs a thrilling and transcendent finale with “Tired of the Silence.”

Accompaniment for this spectacular production is skillfully provided by The National Philharmonic. Projection Designer Andrew Lazarow effectively uses the sides of the stage and the sides of the theatre to project appropriate images, such as stained glass windows for Act I and San Francisco news footage for Act II. Larry Keigwin’s choreography is superb in its use of circles and lines, as well as a variety of ballet-like arm movements.

Beautiful melodies, rich harmonies, talented performers, clever scenic design, fascinating characters, historical drama, and passionate emotions make Strathmore’s production of I Am Anne Hutchinson/I Am Harvey Milk an exciting and entertaining theatre experience. At the same time, it provides a paradigm for an enlightened society that not only tolerates diversity but embraces it. This show will change you.

Running Time: Approximately 2 hours and 10 minutes, with one 20-minute intermission.

I am Anne Hutchinson/I am Harvey Milk played its last performance on April 24, 2016 at The Music Center at Strathmore – 5301 Tuckerman Lane, in North Bethesda, MD. For information on future performances at Strathmore, visit their calendar of events. 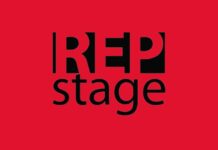 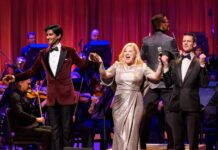 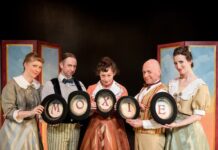