In the rush of incoming Broadway and off/Broadway productions mid-season, I somehow missed the 2nd Stage mounting of this original and quite remarkable new musical by a new trio of writers. Dear Evan Hansen  is the creation of Steven Levenson on book, and composer-lyricist Benj Pasek and Justin Paul, three names new to me, but well known to the various organizations which have been offering prizes to the promising for some time. These gifted writers have been seen and developed by the Lincoln Center Theater, , and several others. Mr. Levenson is also a member of the MCC Playwrights Coalition. Messrs. Pasek and Paul received the Lortel Award for Dogfight, which premiered at 2nd Stage. They’ve had honors too numerous to mention, and both are graduates of the University of Michigan. All of these organizations should be proud of the support and encouragement they’ve offered to this very welcome team of collaborators.

Dear Evan Hansen is surprising in so many ways. The story of a tightly-wound young student, who is incapable of relating to his peers,  his family, or his potential romantic partners, begins as so many other plays, musicals, and films do that have dealt with a similar central character. Willie Baxter and Henry Aldrich in Seventeen and What A Life come to mind, as does Alan Strang in Equus, and Arpad Laszlo in She Loves Me. But Evan Hansen is different — he is aware that he is an outsider, and he is in such pain that his speech reflects the confusion and anguish he so deeply feels. When his arch enemy kills himself with a letter in his pocket that Evan wrote to himself, one that begins “Dear Evan Hansen,” it is the event that offers him the opportunity to change all  that. He grabs it, even though he is fully aware that from that moment on, he will be  living a lie, and deceiving all those whom he wants least to hurt. The twists and turns that Mr. Levenson comes up with to tell his story, are plausible and very satisfying as he lets us learn much about Evan, but also much about his only friend Jared Kleinman, about the bully Connor Murphy,  who terrified him, and Connor’s sister Cynthia, to whom he would love to reach out. Evan’s mother Heidi, (a single mother since his father left when he was 10, for  another life with another wife and family), and Connor’s parents Larry and Zoe, pretty much define Evan’s world, and it is the complicated relationships he has with all of them, which allow this musical play to continually surprise and engage us.

Michael Greif, who staged Next to Normal, shows a firm and consistent hand in the flow and feel of this ambitious tale of self discovery. He is greatly helped  by the free scenic and lighting design by David Korins and Japhy Weideman. Ben Platt, as Evan, manages to show us all of him — the early scenes of rapid speech and spastic motion are alarming, and we begin to hope for this poor boy who is suffering so, not out of self pity, but out of frustration at not knowing how to help himself. His mother loves him, but as his sole financial support, she is far too busy trying to keep her own body and soul together.

Evan’s friend Jared is a cynical, well meaning but inadequate confidante and advisor. There is a girl in school, something of a misfit herself, who will prove loyal to Evan, until he changes her image of him, and then she backs away. The complexity of this book is rare in musical theatre. It’s a small show, only eight principal characters, and they comprise its ensemble as well. Sound is enhanced by the use of virtual community voices that are superimposed on videos that keep things moving.

There is room for fifteen musical moments that combine rare and varied melody, combined with intelligent and incisive lyrics that are beautifully sung by this talented ensemble. Ben Platt has the heaviest burden, and he carries it beautifully. He certainly earned his spurs in the national company (and later on Broadway) as Elder Cunningham in The Book of Mormon, but as fine as his performance might have been, I’m certain it wouldn’t prepare us for the power he brings to this much heavier story. He shows great range here, from the wistful to the romantic to the soliloquized breakthrough which finally sets him free and on the right path to some kind of happiness, as he faces the truth that kills so many hidden lies.

He is supported by a marvelous group of talented actors playing rounded characters. His mother, who has not been the nourishing sort despite her great love for her son, is believable and real as played by Rachel Bay Jones. Murphy Connor’s parents and sister could not be in better hands. The always reliable John Dossett makes perfectly clear that he needs Evan to act as a surrogate son when his own son Connor kills himself, and during Dossett’s brief musical moments, his voice adds much to his characterization.

Laura Dreyfuss and Jennifer Laura Thompson as his wife and daughter bring contrast and truth to the sort of family Evan would love to have had. Will  Roland is the nasty “best friend” whom you wish would get transferred to another town before he does any more harm, well intentioned as he might be. Kristolyn Lloyd as the faithful-to-a-point classmate (she reminded me of “Anybodys” in West Side Story) is there, nicely playing someone who at least makes Evan feel noticed. Mike Faist (Connor Murphy) plays the bully in Evan’s life, and his advisor in death, that opens doors for Evan, as a kind of payoff for all the trouble he caused him during their time together.

Dear Evan Hansen is a small gem of a show, one that packs an emotional punch far greater than many of its larger relatives. Its run has been extended, but it is still limited, so I highly recommend you take it in, or look for it in your local regional theatre, for it will surely play most of them in the months to come.

Running Time: Two hours and 30 minutes, with one intermission. 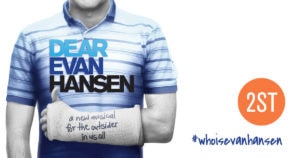