George Mason University’s College of Visual and Performing Arts awards the 2016 Mason Arts Award to Septime Webre, artistic director of the Washington National Ballet. The Mason Arts Award is awarded to a distinguished figure that has had a significant impact on the regional arts community. Webre’s illustrious leadership and artistic vision have left an indelible impact on the metro D.C. region.

“Septime Webre’s 17-year career as artistic director of the Washington Ballet has been transformative, marked by consistent artistic growth and institutional development,” said Rick Davis, dean of the College of Visual and Performing Arts. “As he prepares to pass the torch of leadership this summer, it is fitting to honor him as one of our region’s most consequential artists and builders.”

Septime Webre was appointed Artistic Director of The Washington Ballet (TWB) in 1999, after a six-year tenure as artistic director of American Repertory Ballet in New Jersey. In his tenure as TWB’s artistic director, The Washington Ballet’s impact regionally, nationally and internationally has deepened in three areas. First, the Company’s work has continued to grow and expand in its level of excellence and bold creativity with projects including the “American Experience,” a series featuring original full-length ballets based on iconic works of American literature, and the pursuit of full-length original classic works including “Swan Lake,” a significant milestone for a dance company.

Also, The Washington School of Ballet’s enrollment has tripled and the organization’s commitment to community through its visionary DanceDC and TWB programs has positively affected the lives of tens of thousands of children in the District of Columbia. Much in demand as a choreographer, Webre has created works that appear in the repertoires of many companies in North America, including Pacific Northwest Ballet, Les Grands Ballets Canadiens, North Carolina Dance Theatre, Ballet Austin, Atlanta Ballet, Cincinnati Ballet, Milwaukee Ballet, Ballet San Jose, Kansas City Ballet and Colorado Ballet, among many others. As a dancer, he was featured in works by George Balanchine, Paul Taylor, Antony Tudor, Alvin Ailey and Merce Cunningham, as well as in principal and solo roles from the classical repertoire. Mr. Webre has sat on the boards of Dance/USA and the Cultural Alliance of Greater Washington. Among his many awards, Webre received the DC Mayor’s Arts Award for Visionary Leadership, Excellence in Artistic Discipline and numerous metro DC dance awards.

He has been a recipient of a number of fellowships for his choreography. He is the seventh son in a large Cuban-American family and graduated from the University of Texas with a B.A. in history and pre-law.

About the College of Visual and Performing Arts 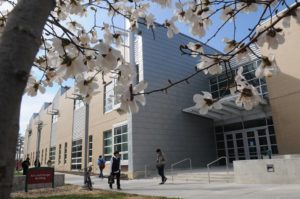 The College of Visual and Performing Arts (CVPA) provides an academic environment in which the arts are explored as individual disciplines and interdisciplinary forms that strengthen one another. The college prepares students for careers as creators, performers, teachers, scholars, arts leaders and arts entrepreneurs. Understanding that an education in the arts is deepened by regular contact with the work of distinguished visiting artists, the Center for the Arts, the professional presentation and production arm of the college, welcomes a variety of professional and world-renowned artists, musicians and actors to its stage. Students have the opportunity to perform, create and exhibit their work in a wide variety of public venues including a 2,000-seat Concert Hall. CVPA is home to the Schools of Music, Dance and Art, the Department of Theater, as well as the Computer Game Design, Arts Management and Film and Video Studies programs.

George Mason University is Virginia’s largest public research university. Located near Washington, D.C., Mason enrolls more than 33,000 students from 130 countries and all 50 states. Mason has grown rapidly over the past half-century and is recognized for its innovation and entrepreneurship, remarkable diversity and commitment to accessibility. Mason is also one of the best values in higher education, producing graduates who lead all Virginia schools with the highest annual salaries.